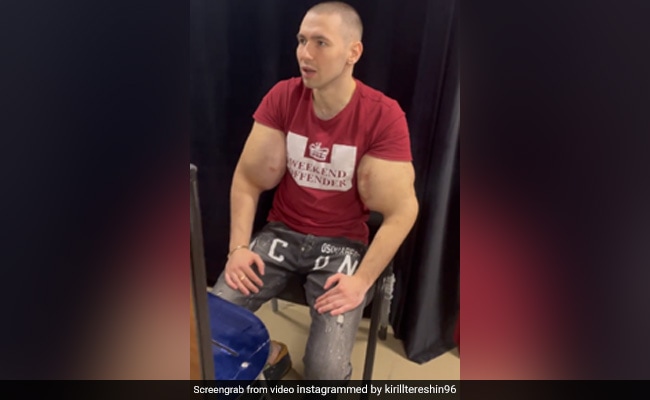 Kirill Tereshin went viral for his bulging arms – achieved with the help of synthol.

A man dubbed ‘Russian Popeye’ for his artificially-pumped up arms is being urged by fans to reconsider his dangerous body modifications. Kirill Tereshin, who goes by the name Ruki Bazuki on social media, is still sporting bulging muscles despite having to undergo life-saving surgery on them two years ago. According to Daily Star, Kirill Tereshin, 25, became a social media sensation for videos that show him flexing his giant biceps or wearing outlandish designer clothes. He was previously  forced to have his enhanced triceps surgically removed – but his ballooning upper arms have raised concerns among fans.

Mr Tereshin began with synthol injections in 2017 in an attempt to get bigger arms. It is a product that bodybuilders use to enhance muscle mass and create larger bulges, but it can also cause nerve and muscle tissue damage, formation of cysts in muscles and even affect cardiovascular health.

According to Ladbible, doctors have warned Mr Tereshin that he could face amputation or even death. “I bulked up my arms when I was 20 due to my own stupidity. I did not think about the consequences,” the Russian social media influencer said.

In 2019, Mr Tereshin had to undergo corrective surgery to remove lumps of hardened petroleum jelly from his arms. “Petroleum jelly is not designed for injection, only external application,” his doctor said at the time. “Kirill injected about three litres into each arm. It saturated the muscle tissues, blocked blood flow.

“Petroleum jelly affects the whole body, kidneys in particular. I think Kirill did not fully realise the consequences of what he had been doing,” Dr Melnikov from Sechenov Moscow State Medical University continued.

Recent photos and videos shared by Mr Tereshin have once again sparked concern among his Instagram and TikTok followers. In the comments section, many urged him to seek medical help.

“Get some professional help before it’s too late…” wrote one person. “Please see a doctor,” another said.