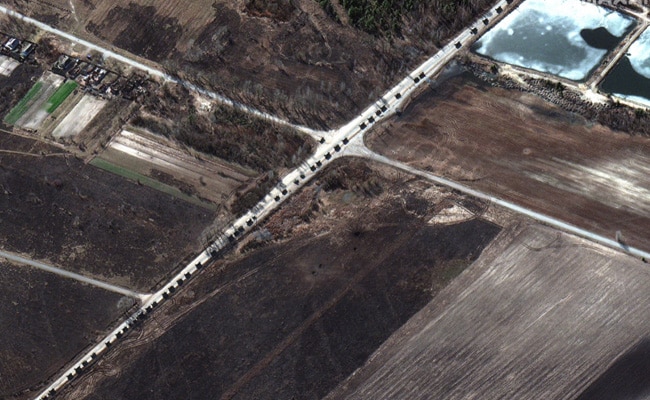 The Russian military convoy as captured in satellite image from Maxar. (Reuters Photo)

The 40-mile convoy of Russian armed forces, which is headed towards Ukrainian capital Kyiv, hasn’t moved in the last few days, according to US defence officials. The convoy was advancing towards Kyiv via a road north of the capital from the Belarus border. It was first spotted in satellite images in February.

“There does not appear to be any significant movement along the Russian axes,” an American official told reporters on Sunday, adding, “Leading elements remain outside these city centers. We cannot give specific distances today.”

The convoy “continues to be stalled”, the official added.

US intelligence agencies estimate that nearly 95 per cent of the combat power Russia had amassed along the border is now in Ukraine.

Secretary of State Antony Blinken said on Sunday that the United States has seen very credible reports of deliberate attacks on civilians in Ukraine.

With Russian President Vladimir Putin vowing to press ahead with his invasion, the number of refugees fleeing Ukraine has crossed the 1.5 million-mark.

About 200,000 people remained trapped in the besieged city of Mariupol, news agency Reuters reported, after fighting stopped evacuation efforts over the weekend, with no sign that massive international sanctions were deterring Moscow from its invasion of Ukraine.

Most people trapped in the port city are sleeping underground to escape more than six days of shelling by Russian forces that has cut off food, water, power and heating supplies, according to the Ukrainian authorities.

About half of the 400,000 people in the city were due to be evacuated on Sunday but that effort was aborted for a second day when a ceasefire plan collapsed.

Moscow has repeatedly denied attacking civilian areas and says it has no plans to occupy Ukraine.

In a phone call with Turkish President Tayyip Erdogan, Putin said he was ready for dialogue to end the fighting but only if Ukrainian forces stopped resisting and accepted his demands, according to the Kremlin.