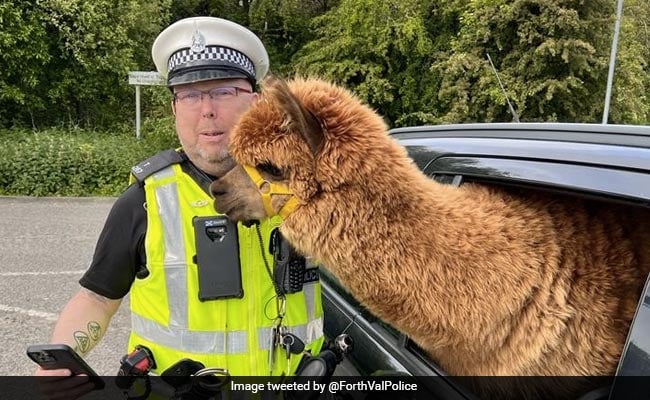 Since being shared, the post has received hundreds of likes.

A Scottish police officer was recently left stunned as he was greeted by an alpaca sitting inside a car while conducting a standard routine check.

Taking to Twitter, the Forth Valley Police informed that the cop pulled over a black estate car in Craigforth, Stirling, for an inspection. “Various vehicle defects were discovered along with some unusual passengers. Some of those engaged were more appreciative of our Road Safety advice than others,” the caption of the post added.

#ForthValleyRP conducted a road check this morning at Craigforth. #OperationScrutinise. Various vehicles defects were discovered along with some unusual passengers. Some of those engaged were more appreciative of our Road Safety advice than others! pic.twitter.com/Dzc6hkzlB0

Since being shared, the post has received hundreds of likes. It also left users in hysterics, with one saying, “Sorry officer…alpaca in the boot next time”.

A user wrote, “A police stop makes the news but for a very different reason. I brought [up] an alpaca up like a baby – now she thinks I’m her mum.” “This is gold-standard posting. Angry alpacas in local police news,” said another. A third user jokingly said, “Fleeced to meet you,” while a fourth simply wrote, “this is just so cute.”

This comes after another alpaca made headlines. Earlier this month, the BBC reported that Annie, a gorgeous camelid alpaca, thinks she is a dog. Annie lives on Dannie Burns’ farm in the United Kingdom, along with 75 other alpacas. However, she is adamant that she is not a part of her herd.

Speaking to the media outlet, farm owner, Dannie Burns, said that he took Annie around two years ago after her mother rejected her. The alpaca soon became a part of the family, however, Dannie added that he noticed that she began acting more like a domesticated animal, roaming around the house and jumping in the car for road trips.

The farm owner added that Annie has no interest in running around in the field with the other alpacas. She even takes it a step further by constantly hanging around the family dogs and mimicking their behaviour.