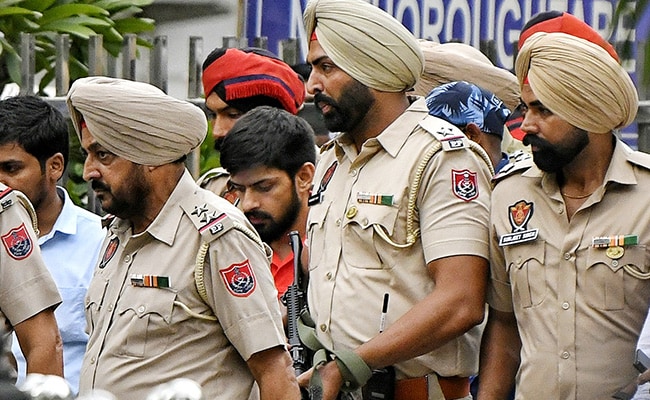 Lawrence Bishnoi was jail in connection with the killing of singer Sidhu Moosewala. (File)

A Delhi court on Thursday sent gangster Lawrence Bishnoi to the custody of the National Investigation Agency (NIA) for 10 days.

Bishnoi, who was lodged in Bathinda jail in connection with the killing of singer Sidhu Moosewala, was arrested by the NIA in connection with a case related to a conspiracy hatched by terror groups and criminal syndicates to carry out violent acts and sensational crimes in different parts of the country.

Special Judge Shailendra Malik passed the directions after the agency moved an application saying his interrogation was required to unearth the larger conspiracy.

During the hearing, the court asked the agency, “What is the locus of NIA in the Moosewala murder case?” The NIA, while seeking Bishnoi’s custody for 12 days, replied that the material was coming from Pakistan and people like Moosewala are targets.

“An investigation into the larger aspect is being carried out, and links are being searched,” the agency said.

The agency has said Bishnoi was arrested after it was found that most of the conspiracies were hatched from inside the jail by him and were being executed by an organised network of operatives based in the country and abroad.

Moosewala was shot dead in May by unidentified assailants in Punjab’s Mansa district, a day after the state government had curtailed his security cover.