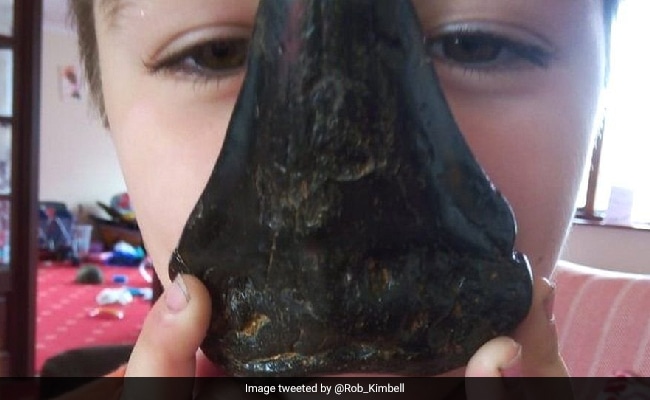 A six-year-old boy in the United Kingdom recently found a rare tooth belonging to the largest shark species that ever lived – known as the Megalodon. According to the BBC, Sammy Shelton discovered the 10-cm-long tooth on Bawdsey beach in Suffolk during a bank holiday break. Professor Ben Garrod, an evolutionary biologist at the University of East Anglia in Norwich, confirmed that the tooth belonged to a Megalodon – the extinct shark species that lived approximately 3 million to 20 million years ago.

It is to mention that the Bawdsey beach is popular among fossil hunters. Sammy, along with his father Peter Shelton, was searching for fossils when he came across the giant shark tooth. As per the BBC, Mr Shelton revealed that his six-year-old son was very excited as earlier they had seen fragments of shark teeth on the beach, but they never came across something this big and heavy. Mr Shelton added that his son was sleeping with the tooth near his bed as he was “very attached to it”.

Further, the father said that he sent the photographs of the find to Mr Garrod. The professor then confirmed that the tooth belonged to a Megalodon, the largest ever shark. Mr Garrod also went on to inform that the Megalodon could grow up to 18 metres (60 feet) in length and weigh up to 60 tonnes.

He said that the Megalodon were “specialist whale eaters and ambush hunters”. The species dominated all the seas around the world other than those parts of the oceans surrounding Antarctica. According to the BBC, Professor Garrod said the name Megalodon means “big tooth”. The giants were active from about 22 million years ago until about three million years ago when they became extinct, he added.

Sammy’s find was “a really big thing” for the little boy, Professor Garrod said, adding, “Not many people who look for a Megalodon tooth actually find one. I know – I’ve been searching since I was a child and I knew all the beaches around the area – but I still haven’t found my Megalodon.”

Meanwhile, Sammy described the “massive” tooth as his best-ever find and said that it was just lying there on the sand and pebbles.