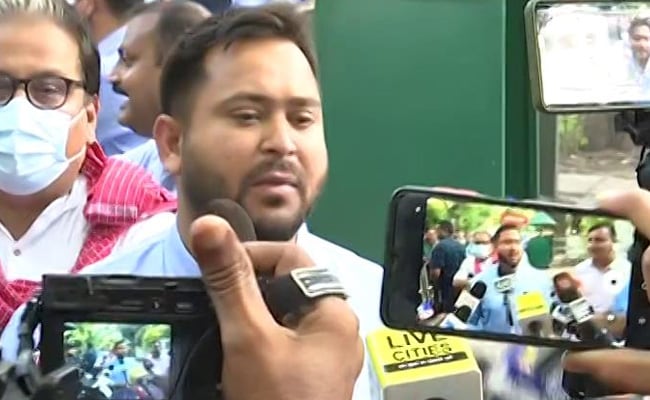 Tejashwi Yadav, Bihar’s new deputy chief minister, today described Nitish Kumar’s return to the “socialist family” as a “slap in the face of the BJP”. He said the BJP’s attempt to “intimidate or buy out” regional parties is aimed at “finishing off the politics of backward classes and Dalits”, because most such parties represent such sections of society.

He cited family and ideological ties with Nitish Kumar, who revived the JDU-RJD-Congress ‘Mahagathbandhan’ after dumping the BJP earlier this week.

“In Bihar, all parties against the BJP are now on the same side. Nitish-ji made the right decision at the right time. This will happen across India now,” Mr Yadav said.

On questions about his promise of jobs, he said it’s good that — away from “communal politics of Hindu-Muslim divide” – the BJP is “finally talking about real issues”. “We have forced them into addressing these issues. We will keep our promise. Just wait a little bit.”

“Bihar has shown a new direction to the country… The common man is suffering due to high prices, but BJP just knows the political of communalism, creating Hindu-Muslim disputes. It is hurting our Ganga-Jamuna tehzeeb, our culture of unity in diversity.”

He said he’s walking the path of RJD chief Lalu Prasad Yadav. “My father has fought communal forces all his life, fought for social justice and for the poor. Woh na dare, na jhuke.”