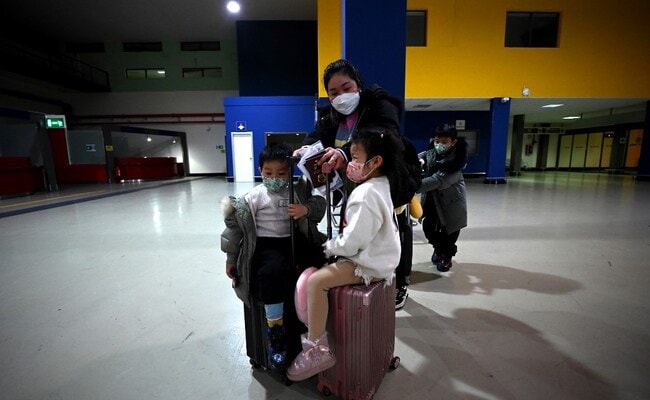 Chinese travellers must undergo a PCR test within the first day of their arrival in South Korea. (File)

Seoul’s decision comes after countries including Italy, Japan, India and the United States announced their own measures, which they say are a bid to avoid importing new coronavirus variants from China.

“Until the February next year, those entering (South Korea) from China will be required to undergo a Covid test before and after their arrivals,” Seoul’s Prime Minister Han Duck-soo said Friday.

Travellers from China must provide a negative PCR test taken within 48 hours before boarding a plane to South Korea, or a negative antigen test within 24 hours before departure.

They will also be required to undergo a PCR test within the first day of their arrival, Han said.

Seoul is “inevitably strengthening some anti-epidemic measures to prevent the spread of the virus in our country due to the worsening Covid-19 situation in China,” Han added.

China’s hospital have been overwhelmed by an explosion in cases after Beijing began unwinding hardline controls that had torpedoed the economy and sparked nationwide protests.

A growing number of countries have imposed restrictions on visitors from China after Beijing’s decision to end mandatory quarantine on arrival prompted many to book travel plans.

Chinese citizens have been largely confined to their country since Beijing pulled up the drawbridge in March 2020.

South Korea will also restrict the issuing of short-term visas to Chinese nationals, excluding public officials, diplomats and those with crucial humanitarian and business purposes, until the end of January next year.

Seoul is scaling back the number of flights from China and all flights from the country will now have to land only at South Korea’s main Incheon International Airport, Han added.

South Korea’s southernmost Jeju Island, which has its own international airport and separate visa entry regime, was a popular tourist destination for Chinese arrivals before the pandemic.

A senior US health official this week said that Beijing has provided only limited information to global databases about the Covid variants circulating in China, and its testing and reporting on new cases had diminished.

Rishabh Pant Injured In Car Crash, Dozed Off While Driving