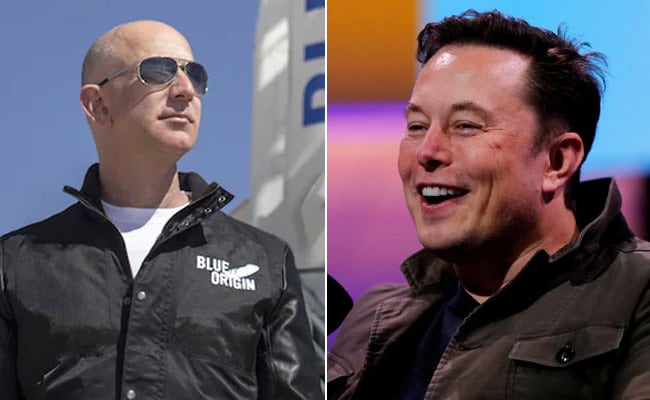 Elon Musk is the founder and CEO of SpaceX, which launched its first all-civilian crew.

Amazon and Blue Origin founder Jeff Bezos has congratulated Elon Musk after the successful launch of SpaceX’s all-civilian Inspiration4 crew. “Congratulations to Elon Musk and the SpaceX team on their successful Inspiration4 launch last night,” Jeff Bezos tweeted Thursday, calling the launch a step towards making space accessible for all. The Inspiration4 team has made history as the first non-professional astronaut crew launched into orbit – a milestone in space exploration that would have been unthinkable just a few years ago.

Jeff Bezos, who himself flew to the edge of space earlier this year, called SpaceX’s Inspiration4 launch “Another step towards a future where space is accessible to all of us.”

The SpaceX CEO responded with a polite “Thank you.”

It was unexpectedly courteous exchange between two billionaires who are often publicly at odds with each other. What made it even more noteworthy is the fact that it is the first tweet by Jeff Bezos in more than a year, and came after an escalating war of words between the two.

Although Jeff Bezos and Elon Musk both have their own rocket companies and are two of the world’s richest men, their relationship can best be described as acrimonious. The two have similar space ambitions – Jeff Bezos started Blue Origin in 2000, two years before Elon Musk launched Space Exploration Technologies Corporation or SpaceX. Twitter users were therefore surprised to see the polite exchange between the two sparring billionaires.

“Look at you guys being all friendly,” popular YouTuber ‘MrBeast’ commented.

Look at you guys being all friendly

More than a few Twitter users were taken aback by the exchange.

You guys are supposed to be mean to each other

I didnt expect you to reply to jeff lmaoo

“Jeff who?” the Silicon Valley Tesla Owners Club tweeted, referring to the time Elon Musk said “Jeff who?” when a reporter asked him about the competition between Blue Origin and SpaceX.

In 2004, when Blue Origin and SpaceX were still in their infancy, Mr Bezos and Mr Musk met for one of their few in-person interactions. Even then, things were testy between the two. “I actually did my best to give good advice, which he largely ignored,” Elon Musk said after the meeting.

More recently, Blue Origin sued NASA over its decision to award a massive Moon exploration contract to its competitor SpaceX – prompting Mr Musk to remark that Jeff Bezos had stepped down as Amazon CEO to pursue a full-time job filing lawsuits against SpaceX.