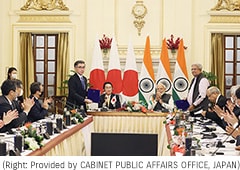 The MOU was signed in the presence of Japanese PM Fumio Kishida and Indian PM Narendra Modi.

Suzuki Motor Corporation (SMC) has signed an MOU with the State of Gujarat, India to invest approximately 150 billion yen (approximately 104.4 billion rupees) for local manufacturing of electric vehicles (BEV) and BEV batteries. Suzuki will build a new electric vehicle production line in India. India has set itself a goal of making 30 per cent of newly-sold cars to be electric by 2030. Now, to achieve that, the government has offered incentives to purchasers of EVs worth $1.3 billion over a three-year period, starting in 2019. The announcement then, comes at the right time where, Suzuki looks to manufacture both electric cars and electric batteries locally. This will of course mean that the EVs will be affordable, however, there is no word on this just yet. carandbike reached out to Maruti Suzuki for a statement regarding the timelines with regards to the new factory but the company said that this was a global decision and it will not comment on the development just yet.

Speaking at the Forum, Toshihiro Suzuki said, “Suzuki’s future mission is to achieve carbon neutrality with small cars.” The statement makes it clear that Maruti Suzuki will target EVs in the small car segment but we keenly await more details from the carmaker about the timelines for products as also manufacturing plant for batteries.