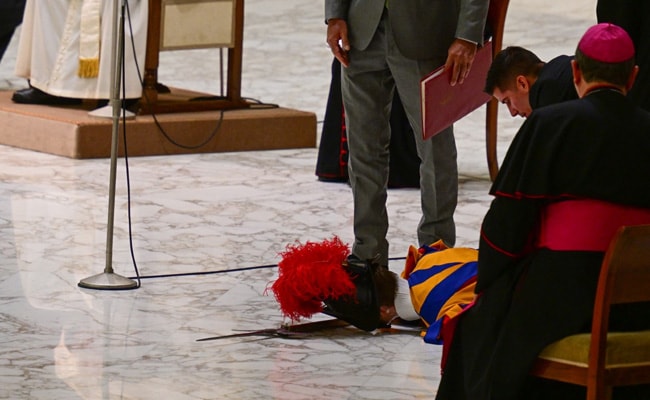 A Vatican spokesman told AFP the guard had “likely suffered a drop in blood pressure”.

A Swiss Guard fainted during Pope Francis’ weekly audience Wednesday, hitting the floor with a clang while still clutching his halberd, as a concerned pontiff looked on.

The young man, a member of the colourful armed body tasked with protecting the pope, toppled over while a religious text was being read out, an AFP photographer said.

He can be seen in photographs lying face down in his distinctive red, yellow and blue striped outfit, with his plumed helmet, sporting its red feather, still in place.

The man, looking pale, was pulled up almost immediately to standing, and helped to walk out of the Paul VI auditorium.

At the end of the audience, the 85-year-old pope broke out of his routine to speak with a plainclothes Swiss Guard.

A Vatican spokesman told AFP the guard had “likely suffered a drop in blood pressure”.

The tiny city state has been suffering a heatwave, with temperatures forecast to hit 36 degrees Celsius (97 degrees Fahrenheit) on Wednesday.

The Swiss Guards constitute the world’s smallest army, numbering 135 in total, and their members must be practising Roman Catholics, Swiss citizens, aged between 19 and 30, and measure at least 1.47 metres (four feet and 10 inches) in height. They must also be single, although they can marry later.

They commit to safeguarding the pope for at least 26 months.