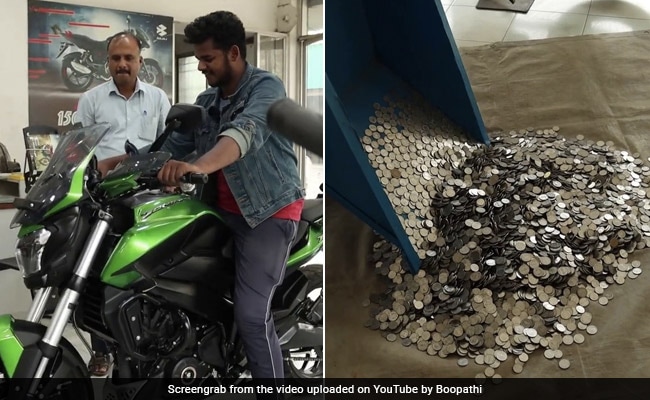 A man in Tamil Nadu bought the bike of his dreams after saving for three years. While that in itself is not usual, what did create a buzz online was his mode of payment – he paid for the vehicle, worth Rs 2.6 lakh, using only one-rupee coins.

According to Times of India, V Bhoopathy walked away with a Bajaj Dominar 400 from a showroom in Salem on Saturday. The bike was handed over to him after five members of the showroom staff, along with four friends of Mr Boopathi, worked for over 10 hours to count all the coins. The coins were brought to the showroom in a van and offloaded using wheelbarrows.

Photos shared by news agency ANI on Twitter show the team hard at work counting the one-rupee coins. One of the pics also shows V Bhoopathy, 29, with his brand new motorcycle.

Tamil Nadu | A youth in Salem paid Rs 2.6 lakh to buy a bike with Re 1 coins he collected in three years. pic.twitter.com/ayLgBa23Ja

While the showroom manager was initially reluctant to accept the payment in coins, he said he relented because he did not want to disappoint a customer.

“The banks would charge 140 as commission for counting 1 lakh – that too in 2,000 denomination. How will they accept it when we give them 2.6 lakh in one-rupee coins,” showroom manager Mahavikranth was quoted as saying by Times of India. “I finally accepted, considering Boopathi’s dream of buying a high-end bike,” he added.

However, news agency PTI reported that after the initial euphoria of buying his dream bike, the 29-year-old is now busy converting the coins back to currency notes, owing to the bank strike underway as part of the call given by various trade unions against certain Central policies.

Within a day he had managed to convert 40,000 one rupee coins into currency notes and claims it would not be difficult to convert up to Rs 2 lakh.

“Of course, I thought it would be a better idea to pay in one rupee coins as I found it difficult to acquire five rupee coins with which I commenced to save,” Bhoopathy, a youtuber, said.

He had first saved Rs 10,000 in multiple currency notes and later took pains over the course of four years, depending on hotels, banks and brokers to convert all his savings to one rupee coins. “I withdrew my money from the ATM and converted them,” he adds.

He had narrowed down on a showroom in Salem after the manager said he has the vehicle the Youtuber desired for.

“I convinced him to accept the one rupee coins and even assured to take the responsibility to convert them back to currency notes if he faced any difficulty,” Mr Bhoopathy said

Mr Bhoopathy, who is a YouTuber, also shared a video of his bike-buying experience. He told Times of India that he had inquired about the cost of his dream bike three years ago and was told it was Rs 2 lakh.

“I didn’t have so much money at the time,” he said, adding that he decided to save the money he earned as revenue from his YouTube channel to buy the Bajaj Dominor 400.