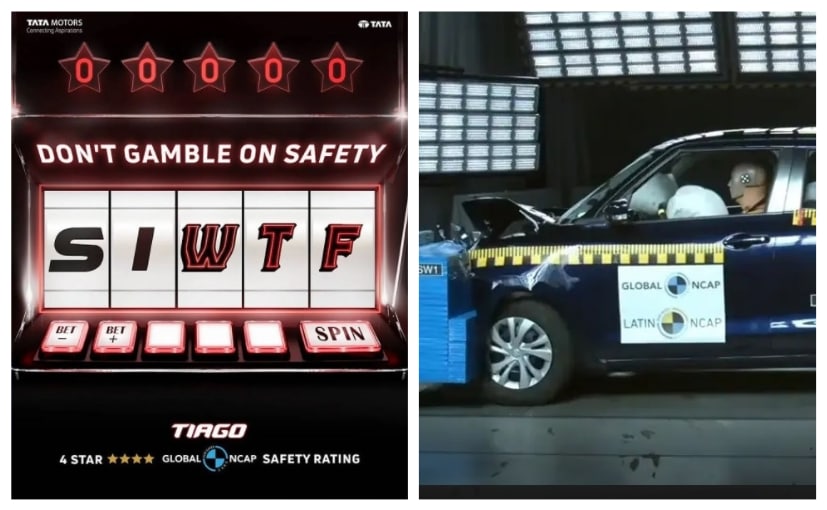 In the latest round of Latin NCAP crash tests, the made-in-India Maruti Suzuki Swift scored zero stars. This prompted a response from Tata Motors, who took a dig at the Swift in a hilarious fashion on social media.

When it comes to crash test results, Maruti Suzuki has had a poor track record. The latest example being that the made-in-India Suzuki Swift scored zero stars in the latest round of Latin New Car Assessment Program (NCAP) crash tests. The car received a 15.53 per cent rating for adult occupant protection, while the same for child occupant protection was 0 per cent. This prompted a response from Tata Motors, who took a dig at Maruti Suzuki in a hilarious fashion on social media. The Instagram post from Tata Tiago‘s account had an image of a slot machine with the letters of the word ‘Swift’ jumbled and a copy that said ‘Don’t gamble on Safety’.

The highlight here was the fact that while the Swift scored zero stars, the Tata Tiago was tested by Global NCAP in early 2020 and managed to score an impressive four stars. Of course, the Tata Nexon and the Tata Altroz are two vehicles which have scored five stars in global NCAP crash tests.

We would be remiss if we did not mention that the Maruti Suzuki Vitara Brezza scored four stars in global NCAP crash tests too. But overall, manufacturers like Mahindra and Tata have made it a habit to manufacture safe cars for India, and have furthered that culture, something that is still lacking at Maruti.

This won’t be the first instance of Tata Motors taking pot-shots at its rival manufacturers though. Earlier, Tata Motors trolled the Hyundai Grand i10 Nios, the Maruti Suzuki WagonR and the Maruti Suzuki S-Presso as well, after their crash test results were declared. Needless to say, Tata Motors has a savage sense of humour and isn’t afraid of taking on its rivals in the segment, at least on social media.