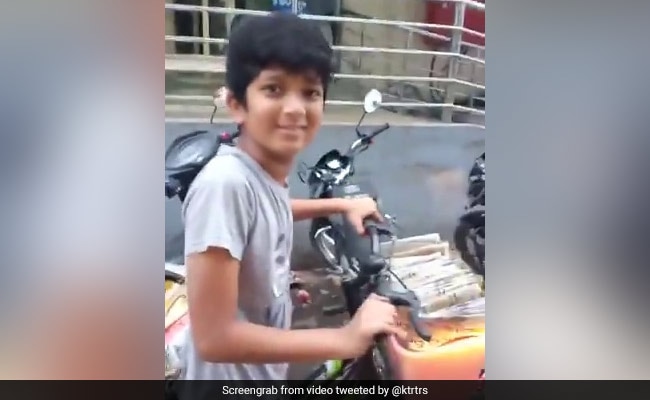 KT Rama Rao shared a video of a boy delivering newspapers in the town of Jagtial.

A video of a 12-year-old boy from Jagtial town in Telangana has caught the attention of state minister KT Rama Rao (KTR). In the viral clip, the boy is seen delivering newspapers while riding a bicycle. When a passerby asked him why he was working, the boy said that he was working as well as studying. Sharing the clip, KTR wrote, “Loved this video from Jagtial Town. This young lad a Govt school student called Sri Prakash; loved his confidence, composure and clarity of thought and expression.”

When asked why he was delivering newspapers, Sri Prakash replied in Telugu, “Why should not I?” He was then questioned about his studies and Sri Prakash was quick to respond. “Along with my studies, I am working as well. If I do this now, it will only help me in the future,” he said. He is a student of Class 6.

After KTR shared the video, it has gone viral. The post has garnered over 200,000 views so far.

Loved this video from Jagtial Town

He says what’s wrong in working while studying & goes on to say it’ll keep him in good stead in future pic.twitter.com/Ug4wYIGn8a

Responding to the minister’s tweets, several users praised the boy. One user said, “We should teach our next generation the same – dignity of labour.”

We should teach our next generation the same – DIGNITY OF LABOUR !!! https://t.co/7TnYPPksmN

“He has a great future. God bless him,” said another user.

For his maturity and confidence ????, This kid should inspire many people here,if family isn’t stable their is nothing worng for helping his parents by working part-time alongwith his studies ❤️He has a great future . God bless him ???? https://t.co/EPAMAuuODk

“This boy has shown great maturity,” one user wrote.

This boy has shown a great maturity.. https://t.co/f813FQADb1

Some others also pointed out that it could still be considered child labour.  “This is not a right age for a child to work and earn even if he is willing,” suggesting a scholarship.

But appreciation is okay . some scholarship should be started equivalent to his earning. This is not a right age for a child to work and earn even if he is willing. Kindly look into. https://t.co/xRpDDEHjQO

“Though the video is inspiring and lovable, at the end of the day it is child labour,” read a comment.

Though the video is inspiring and Lovable, at the end of the day it is Child labour.

Atleast the kids need to be in 16’s to start jobs. https://t.co/cnsvbV0Xgw

Tell us what you think of the video in the comments.