Tesla had promised that the Cybertruck will come with a solar roof as an option.

The Cybertruck is expected to launched at the fag end of the year.

While the Cybertruck is a while away from being a car on the road because of the delay due to semiconductor shortages, the pandemic and the general overenthusiastic outlook of Tesla’s founder CEO Elon Musk, we now have an idea where development for the pickup truck is heading. A patent application has revealed that there will be a solar roof option. Now, this is nothing new per se as Musk had talked about the solar roof himself stating that it would be an option that would add 15 miles of range per day. The patent application provides insight into how the system will work and how the car will look when the roof is on. This would be a breakthrough as many automakers have talked about adding a solar roof on the car but it hasn’t actually come to fruition, so Tesla may be amongst the first to do so.

Like in Cybertruck’s case, the issue is that of range and of what will be powered. Since the roof can’t be large enough to power a car, it can only provide enough juice to run auxiliary features. This is also not the first time Tesla has dabbled with a solar roof as Musk wanted his engineers to have one on Model 3 in 2017 but at the time it was deemed unviable.

Since the Model 3, solar cell efficiency has improved and the Cybertruck is also a bigger vehicle providing more room for the panels to save up energy that would be worth powering anything. Tesla’s retractable bed cover as visualised in the patent filing looks quite elegant. 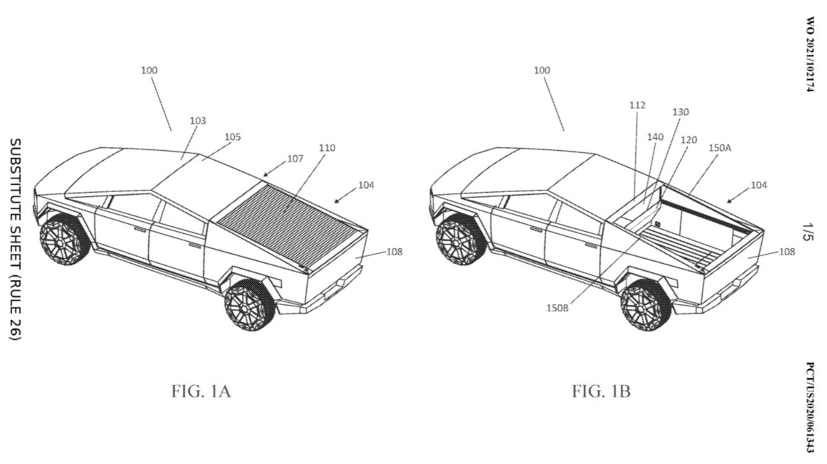 The solar roof will be offered as an option

It is also said to be strong enough for anyone to be able to sit on top of the bed cover. Tesla also says that it can embed solar cells in the tonneau cover. Mind you, this will be an optional feature and it will need all these options to take on the highly impressive Ford F-150 Lightning.