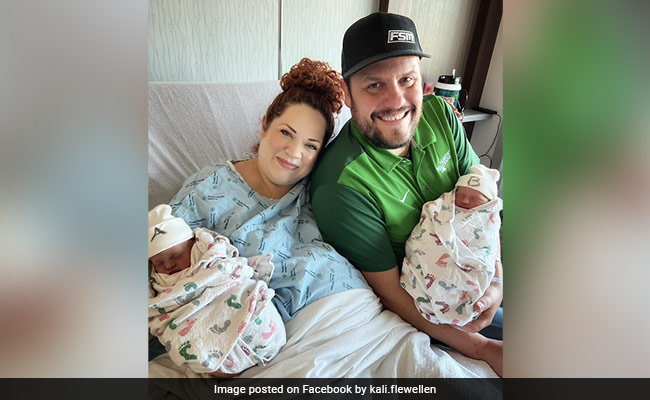 Despite being born only a few minutes apart, the babies were born in different years.

An American woman gave birth to twin babies in Texas just around midnight on New Year’s Eve, but they ended up being born in separate years, according to The New York Post.

Kali Jo Scott gave birth to her first twin baby girl, Annie Jo, at 11:55 p.m. on December 31 and then delivered her second daughter, Effie Rose, at 12:01 a.m. on January 1, according to reports. The couple had anticipated that the babies would be born around midnight, according to the news outlet.

A happy mother Kali Jo shared a post on Facebook with images of her babies and husband and wrote, “Cliff and I are so proud to introduce Annie Jo and Effie Rose Scott! Annie was the last baby born in 2022 at 11:55 p.m. Then, Effie was the very first born in 2023 at 12:01! They both came out healthy and happy and weighing 5.5 pounds. Cliff and I are just so excited for this adventure!”

“We had kinda joked wouldn’t it be funny if, you know with the holiday and new year’s eve over the weekend. If they had their own birthday, and then it turned out that was more of a possibility than we realized,” Kali Jo Scott, the mother told to CBS News.