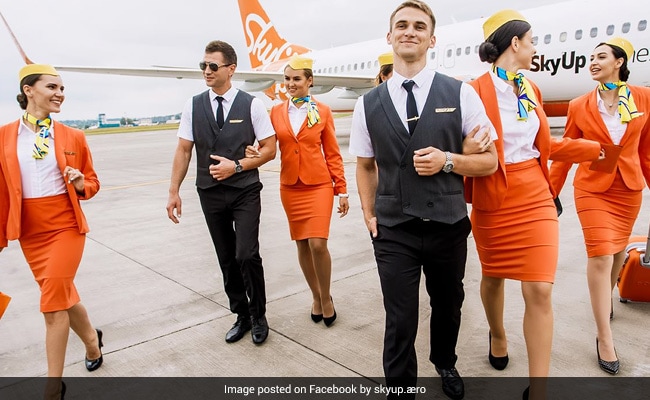 A budget airline in Ukraine is ditching its old uniform of high heels and pencil skirts for women employees for a more comfortable alternative. SkyUp Airlines, founded in 2016, is one of the youngest low-cost airlines in Ukraine, but already one of its biggest. The airline said it is giving crew members the option of wearing sneakers and trousers on board after surveying the staff and discovering that female employees were “fed up” with high heels, pencil skirts and tight blouses.

“Twelve hours on your feet, flying from Kyiv to Zanzibar and back. If you wear high heels, you are hardly able to walk afterwards,” flight attendant Daria Solomennaya, 27, told the BBC. “That includes four hours of security checks and cleaning.”

Besides contributing to health issues — “Many of my colleagues are permanent clients of podologists; their toes and toe-nails are constantly damaged by high heels,” flight attendant Daria Solomennaya said — there are other problems with tight skirts and heels.

Flight attendants might have to rush to open an exit door over a wing if a plane makes an emergency landing on water. To do so, they would have to clamber over people – “Imagine how I could do that in a pencil skirt,” Ms Solomennaya said.

But SkyUp has made a welcome change. According to a press release, the airline’s passengers will soon be greeted by flight attendants wearing the new SkyUp Champions uniform. The uniform includes the Nike Air Max 720 sneakers instead of high heels – shoes that feature “incredible cushioning and resilience for maximum comfort all day long.”

The airline said it is also ditching suits and skirts for “trouser suits with soft tailoring aesthetics and trench coats.”

To come up with these new uniforms, it studied the evolution of cabin crew uniforms from the early 1930s.

“Times have changed, women have changed, so in contrast to the conservative classics, heels, red lipstick and a bun, a new, more modern and comfortable image of a ‘champion’ has appeared,” said Marianna Grigorash, Head of SkyUp Airlines Marketing Department, while explaining the concept behind the new orange-coloured uniforms.

“The study and interviews with flight attendants became the starting point for working on a new image…So we decided to replace the shoes with sneakers.”

Ms Grigorash told BBC that the company realised its female staff did not want to be seen as “sexualised and playful”.