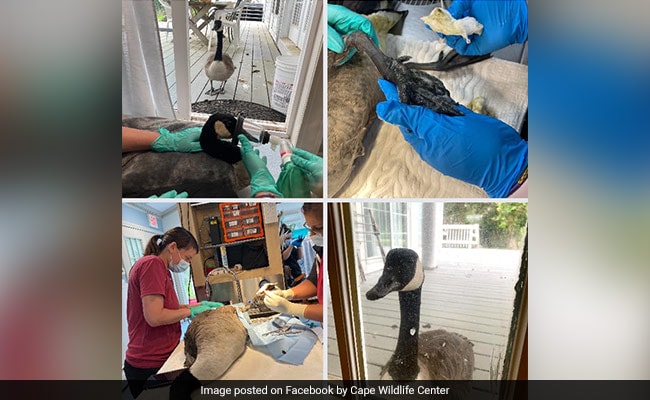 A goose waited outside the clinic where its mate was being treated.

Veterinarians treating a wild Canadian goose, which had developed a significant limp, were in for a surprise when his mate visited them and stood by the glass door through the entire period of surgery. The New England Wildlife Center’s branch in Massachusetts, US, said it found the goose, who they refer to as Arnold, limping near a pond and decided to take him in for a check-up at its backyard hospital. The staff discovered two fractures on Arnold’s foot that threatened his survival. As they prepped the goose for surgery, they heard a “faint tapping at the clinic door”, the wildlife centre said.

“We turned to see that his mate had waddled up onto the porch and was attempting to break into our clinic!” the centre wrote in a Facebook post last week, adding that the mated pair “have been together for several years. They are totally wild and usually keep to themselves when people are around”.

Arnold’s mate had somehow located him “and was agitated that she could not get inside” to see him as he lay on the operation table. “She remained there throughout the entire procedure, watching us work, never moving from the doorway”.

Seeing her desperation, the hospital staff decided to let Arnold recover near the door so that he could be close to his mate. “We opened the door and gave Arnold his flow-by oxygen in the doorway. His mate immediately calmed down and began to groom him through the door. They both seemed much more at ease in each other’s presence,” added the centre in the post.

A photograph posted on Facebook showed Arnold with an oxygen mask over his beak as his partner looked on.

About his injury, the centre said that their “veterinary team found that he had two open fractures on his foot. This means that the tissue and skin have been pulled away leaving the bone exposed. Our best guess is that a Snapping turtle or other predator attacked him while swimming. In order to save the foot, and give him a chance at survival, we knew we had to perform surgery to amputate one of the digits and suture the other wound closed. We gave Arnold antibiotics and pain medications and fasted him for surgery the next morning.”

Arnold will need several weeks of treatment before he is allowed to rejoin his mate in the wild. “He will need to be kept inside for the majority of this time in order to keep his wound sterile and prevent infection,” stated the post.

The lovely story has attracted the attention of many social media users. The Facebook post has received more than 5,000 reactions and many comments about the amazing story.

“I know people don’t love Canada Geese, but I think they are pretty amazing. Especially since they mate for life and have extraordinary pair bonds. They are great parents too and will adopt orphaned babies….Love them!” said Chris Gathman.

“I adore them. Stopped traffic recently for a large group to cross a busy city street,” said Maureen Roy.

“I’m loving this story. Thank you for helping him and for letting his mate see him so she knew he was ok,” said Kellie Curfman Newman.

“What a wonderful love story,” said Danalyn Adams. “Thank you for your care and compassion in helping Arnold. Soon, he will be reunited with his beloved.”

Thanking the wildlife centre, Tom Lemanski said, “Hope all goes well. Please keep us up to date on his recovery. Bless you and your team of caring hearts.”