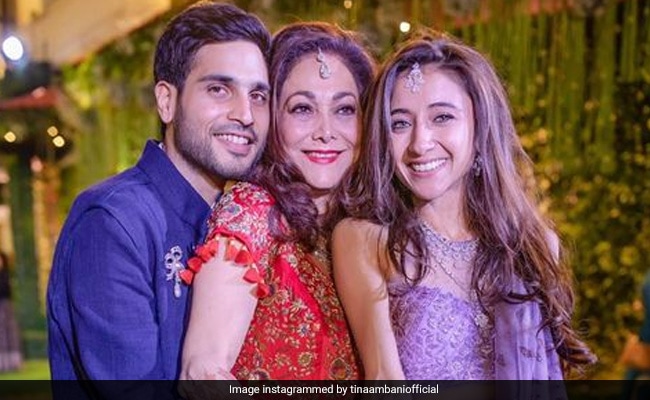 Tina Ambani with son Anmol and his wife, Khrisha.

Pictures from the wedding festivities, which lasted several days, had earlier gone massively viral online. Tina Ambani had first introduced her daughter-in-law in an Instagram post shared towards the end of February, a few days after the wedding. “Welcoming our daughter!” she had written, adding that the family was overjoyed to welcome her.

This time, she echoed the same sentiments as she shared some previously-unseen pics from Khrisha and Anmol Ambani’s wedding reception. “Meet Khrisha Ambani, the daughter we’ve always wanted,” she wrote on Instagram. “Our family grows more beautiful, our lives are fuller, more blessed,” Tina Ambani added.

The pics have collected nearly 4,000 ‘likes’ on Instagram since being posted two hours ago.

Anmol and Khrisha’s December engagement was followed by a February wedding, which took place at Anil Ambani’s Cuffe Parade residence in Mumbai. Tina Ambani had earlier shared glimpses from the celebrations which revealed that Nita Ambani and Isha Ambani also attended the wedding. Ambani family matriarch Kokilaben was also spotted in the photographs.

Anmol Ambani, a Warwick Business School graduate, is a director at Reliance Capital, while Khrisha is the CEO and co-founder of Dysco, a social networking website.