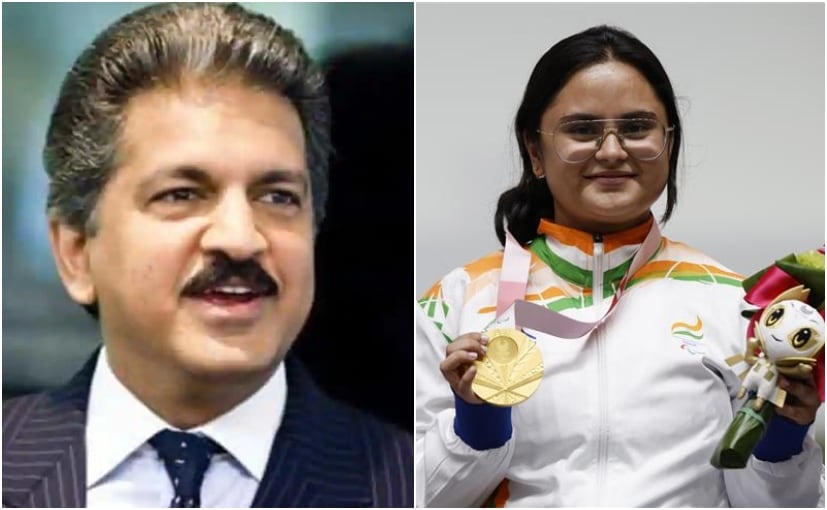 Anand Mahindra announced that the para shooter Avani Lekhara, who won gold in the Women’s 10 metres AR Standing SH1 Final, will receive a special-designed SUV customised for people with disabilities.

The Indian athletes at the Tokyo Paralympics 2020 are creating history as they claim more and more medals every day. And it’s now para shooter Avani Lekhara who has made the country proud by winning gold in the Women’s 10 metres AR Standing SH1 final. Not only did the Indian athlete win gold but also set a new Paralympic record of 249.6 metres. This is the first-ever gold for India in Shooting Para sport. And to celebrate the milestone, Anand Mahindra, Chairman – Mahindra Group, has announced the company will be gifting an SUV to the Lekhara. However, the para-athlete will get a specially-designed SUV, the first one from the OEM, which makes ingress and egress easier for people with disabilities.

A week ago @DeepaAthlete suggested that we develop SUV’s for those with disabilities. Like the one she uses in Tokyo.I requested my colleague Velu, who heads Development to rise to that challenge. Well, Velu, I’d like to dedicate & gift the first one you make to #AvaniLekhara https://t.co/J6arVWxgSA

In his tweet, Anand Mahindra wrote, “A week ago @DeepaAthlete suggested that we develop SUV’s for those with disabilities. Like the one she uses in Tokyo. I requested my colleague Velu, who heads Development to rise to that challenge. Well, Velu, I’d like to dedicate & gift the first one you make to #AvaniLekhara.”

To give you context, para-athlete Deepa Malik tweeted a video of herself getting into a vehicle using a specially-developed mechanism that made ingress and egress into a car seat easier for people with disabilities. One such vehicle equipped with this mechanism was being used at the Tokyo Paralympics 2020. Malik tweeted out to automakers requesting them for a similar mechanism for such vehicles so that people with disabilities can drive their cars as well. Anand Mahindra took note of the tweet and challenged his team at Mahindra Research Valley to have such systems installed in their cars.

I hear you @DeepaAthlete & I convey your challenge to my colleague Velu & his team at Mahindra Research Valley. We can work with companies like @TrueAssisTech which have already installed such systems in our cars. And we proudly cheer OUR contingent at #Paralympics #Praise4Para https://t.co/KfPamYAkLZ

While Mr Mahindra has not said which car will get the system first, it will certainly be a step in the right direction if manufacturers can create systems that come from the factory.

19-year-old Avani Lekhara from Jaipur sustained spinal cord injuries in a car accident in 2012. She is now only the fourth Indian athlete to win a Paralympics gold after swimmer Murlikant Petkar in 1972, javelin thrower Devendra Jhajharia who won in 2004 and 2016, and high jumper Mariyappan Thangavelu who won in 2016. On a related note, MG Motor India also announced that it plans to gift an SUV to Para table tennis player Bhavina Patel who won a silver medal in the final round.