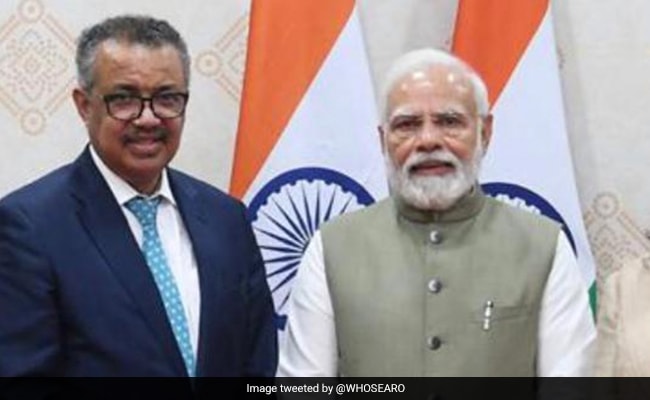 Prime Minister Narendra Modi today gave WHO Director-General Tedros Ghebreyesus a “Gujarati name” at his request. “I am enjoying calling you Tulsibhai,” PM Modi said to the WHO chief at the Global AYUSH Investment and Innovation Summit at Gandhinagar.

“WHO Director-General Tedros is a good friend of mine. He always told me Indian teachers taught me and I am here because of them. Today he told me – ‘I have become a pucca Gujarati. Have you decided a name for me?’ So I will call him Tulsibhai as a Gujarati. Tulsi is a plant that modern generations are forgetting. Generations have worshipped Tulsi. You can also use the Tulsi plant in marriage. So now you are with us,” the Prime Minister said.

The PM was speaking after inaugurating a three-day Global AYUSH Investment and Innovation Summit in Gujarat. Mauritius Prime Minister Pravind Jugnauth was also present, besides the WHO Director General.

PM Modi announced that India would soon introduce a special AYUSH visa category for foreign nationals who want to come to the country for traditional medicine.

“Soon, India is going to introduce a special AYUSH visa category for foreign nationals who want to come to India to take advantage of AYUSH therapy,” he told the gathering.

The possibilities of investment and innovation in the field of AYUSH are limitless, he said. “We are already witnessing an unprecedented boom in the production of AYUSH medicines, supplements and cosmetics,” added the Prime Minister.

“We are going to make a special AYUSH hallmark. This hallmark will be applied to the highest quality Ayush products made in India.”

Speaking about the contribution of alternative medicine during the COVID pandemic, PM Modi said, “It’s the first time an investment summit is being held for the AYUSH sector. I thought of this at the time COVID19 outbreak. During this time ‘AYUSH Kada’ and other similar products have helped people boost their immunity.”