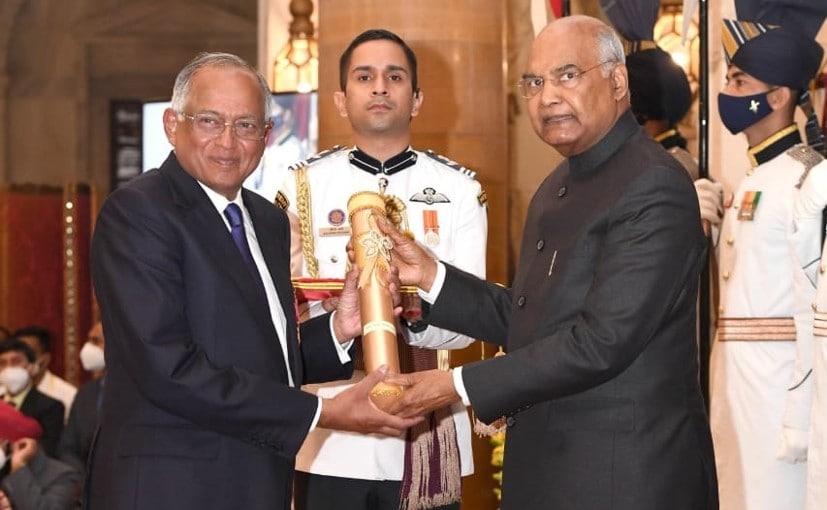 The Padma Bhushan is the third-highest civilian honour in the country and was conferred to Venu Srinivasan for his contribution to the field of trade and industry.

TVS Motor Company Chairman, Venu Srinivasan was awarded the Padma Bhushan by the President of India, Ram Nath Kovind during a special ceremony at the Rashtrapati Bhavan. The Padma Bhushan is the third-highest civilian honour in the country and was conferred to Venu Srinivasan for his contribution to the field of trade and industry. The TVS Group head has played an instrumental role in shaping the country commerce and trade journey over the past decades. Not just Srinivasan but Anand Mahindra, Chairman – Mahindra Group, was conferred with the Padma Bhushan award at the same ceremony.

Venu Srinivasan was also awarded the Padma Shri Award in 2010 by the President of India. The TVS Group Chairman, which also includes Sundaram-Clayton and TVS Motor Company, is the Managing Trustee of Srinivasan Services Trust which he set up in 1996. The Trust operates in over 5000 villages and some of its thrust areas include empowerment of women and afforestation.

Mr Srinivasan is also known to be passionate about his commitment to society through a unique model of village development in South India. One of the most notable accomplishments of the stalwart was pioneering the TQM (Total Quality Management) concept that helped the company achieve newer heights with each product launch. The concept gradually found its way across the Indian auto industry. Mr Srinivasan also served as the president of CII and chairman of the National Committee for Quality in the past.