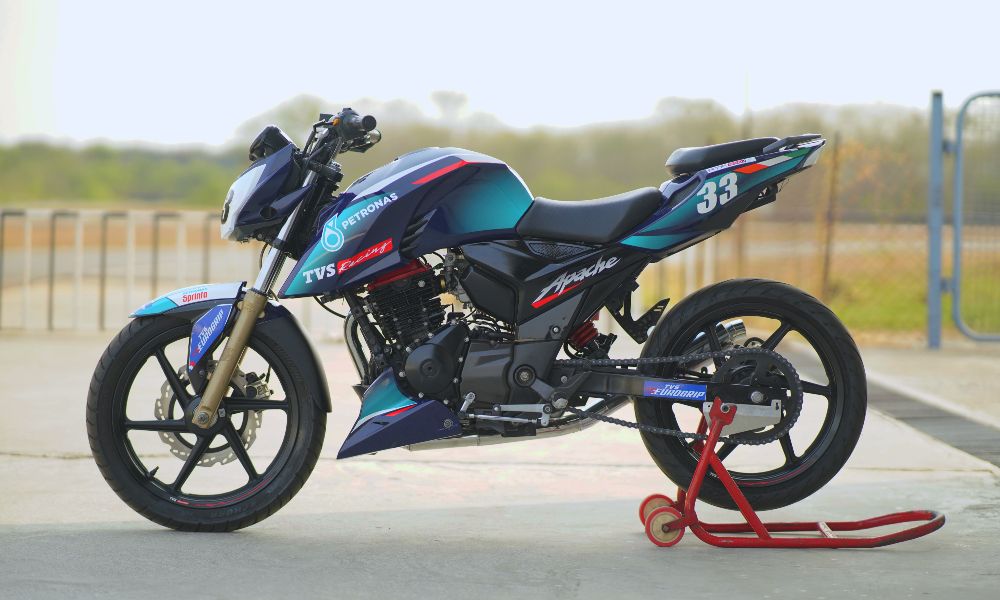 For the past few years, TVS Motor Company has been increasing its presence on the race tracks, and it added to that by hosting the TVS Young Media Racer Programme (YMRP). Having a racing pedigree of over two decades, TVS elected to use this experience to start an event with an aim to teach up and coming media riders the art of riding a motorcycle on a race track, and to give them a taste of motorcycle racing. For this purpose, TVS decided to use its Apache RTR 200 4V motorcycle, and got it track ready by making only a few changes, including a new exhaust, and the inclusion of rather skinny but grippy TVS Eurogrip tyres. Add to that a racing livery, and the race bikes were ready. Now in its sixth season, TVS sent carandbike an invite for the YMRP, and I was given the wonderful opportunity to make it to the tryouts.

TVS hosted a single day selection programme on the Madras Motor Race Track (MMRT) in the outskirts of Chennai on May 5, 2022. While it was a single day event, the programme was comprehensive and included rigorous training and track riding in an alternating sequence, giving us riders ample amount of time to implement what we were learning. At the end of the day only 12 of us were to get selected, so it was a race against the clock to learn and adapt as much as I could to make the cut and be selected for the three-round racing season.

During the training, we were taught a host of different techniques by ex-National Racing Champion Harry Sylvester. Body language, racing lines, braking, gear-shifting, race starts were amongst the key things taught to us, but what I found to be the most important of it all, was how to lean. Until I started to attempt leaning properly on the motorcycle I didn’t know I could use so many muscles in my body all at the same time. That is how physically demanding riding a two-wheeled racing machine close to the limit is, even though I was still far off the limit.

Having had plentiful track experience in my 4 years of racing single seater race cars in the National Racing Championship, racing lines and track layouts weren’t intimidating to me, and I got around MMRT pretty comfortably. But it was only when someone overtook me from the outside that I realised how slow I was in the corners. The end of the day came soon, and it was time for us to lap as fast as we could in qualifying, and while I was still slow and couldn’t get a great lap that I wanted in the short qualifying session, I managed to wiggle my way into the top 10, and all I could think about was hitting the race track on the National Championship race weekend in June.

The short wait for the race weekend was painfully long still, as I couldn’t wait to get back to a race track and push the limits further. I knew the TVS Apache RTR 200 4V had a lot more potential, and I just wanted to explore it further. The first of the three rounds of the National Championship was on June 11 and 12, 2022, on Kari Motor Speedway in Coimbatore. This is a race track that I especially love, and that excited me even more for the race. The race weekend was short, with 1 practice session and qualifying scheduled for Saturday, and a single race for our category on Sunday, as there were so many other categories running on the weekend too. I can’t say I wasn’t tempted to take an Apache RR 310 for a spin around the track, but this was a time to learn, improvise, and go faster on the track, and it is better done on a smaller machine as it gives more time for a rider to process what’s happening as is it is happening. Think fast go-karts to a Formula car, and that’s one of the reasons why Formula 1 drivers keep karting in their spare time.

It was soon time for the practice session and my first outing on the track felt brilliant. I already felt I was going faster than I was on the selection day, but since we were on a different race track, I didn’t have a metric to compare my performance between the two events. So I just decided to keep an eye on the fastest times in my category and try and get as close to them as possible, and my lap times kept steadily improving. Time soon came for qualifying and I geared up – quite literally – to hit the track again. My feeling with the bike was swiftly improving, and I put up a brilliant lap. I was super happy with it. The results came though, and I was only ninth! It just showed how much I had the scope to improve still. But my lap times improved greatly over the practice session and were that much closer to the top, giving me the much needed confidence.

On the next day, we only had the one outing. The race! Right at the start, I got a brilliant launch, all thanks to the clutch release technique taught to us by Harry Sylvester and other TVS team riders, and I was already up in P6. First corner came and I was up in P4. I remember thinking, “I have a good shot at a podium here, let’s make it count”. The first few corners got over and as I entered the back straight, others started wheezing by me. 5th, 6th, 7th, … I just kept dropping back, right until I was last! And that’s when it hit me, I was considerably heavier than all the other riders. Weighing in at 93 kgs, I was around 25-35 kgs heavier than literally everyone else on the grid, and that was what was restricting me. Think of it like racing with a 20-litre water can tied to my bike. These race machines being so light and agile, respond very dynamically to rider weight. Needless to say, the next 8 laps were super fun, as I was blisteringly fast in the corners, and kept gaining and losing as many as 4 places at a time.

I just about managed to finish the race in P9, the position I started in, after having swapped places several times. But what was the most important thing of the weekend was that I had a safe and an incident free outing. The time that I spent on the track and in the paddock taught me many things, and has made me a much better rider since. I can even see improvements in my daily riding because of that, and I only have TVS and its coaches to thank for it. The amount of skill that I acquired in this time would’ve taken me years of riding on the road to procure, which is why I feel like this is an extraordinary initiative by TVS to teach young media riders these skills, which we can later go on to use in reviewing more and more vehicles for you, and bringing you a closer to accurate report with our limited experience.