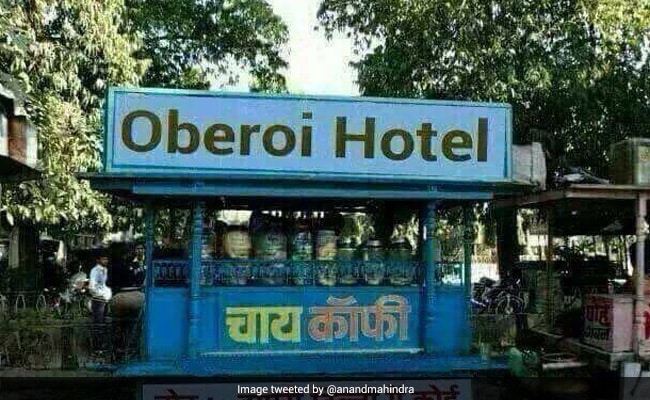 Industrialist Anand Mahindra has shared an image on Twitter that underlined the enterprising spirit of people. The pic features a tea stall named after a luxury hotel group headquartered in Delhi. Though the image suggests that the owner of the tea corner was inspired by the success of The Oberoi Group, it makes it clear that the roadside venture has no branch in Delhi. “Note: We don’t have a branch in Delhi,” reads the disclaimer on the stall.

Mr Mahindra’s message was intended to inspire his online family to dream big and then chase it with all willpower, but there’s one, small problem: the image has been photoshopped. Several users pointed this out in the comments section.

Upon looking closely it seems morphed!

Every big things starts from small ????

Another praised the touch of humour in the image.

A person said that he wondered how Mr Mahindra comes up with such “humorous pictures” every week.

The original image seems to have first appeared in a blog dedicated to Udaipur. Posted in 2015, it shows a tea stall located in Udaipur and named Bhairunath tea stall. According to a blog dedicated to the city’s many offerings, this roadside kiosk serves nice tea that is instantly refreshing. It has been running for over a decade.

In Anand Mahindra’s pic, the name “Bhairunath” seems to have been changed into “Oberoi Hotel”. The “no branches” disclaimer also seems to have replaced the original text, which reads “Bhairunath tea stall, nashta centre.”

Recently, Mr Mahindra, 66, sparked off a trend among social media users by sharing images of sunsets in and around Mumbai. The trend began as everyone was trying to capture the spectacularly clear skies of Mumbai after showers in January. Soon after Mr Mahindra shared an image of the sunset taken in Alibaug, his timeline was filled with people dropping images they had captured.