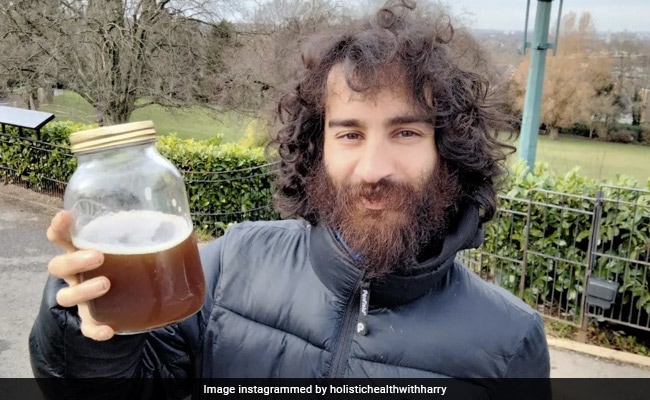 There are no known health benefits from drinking or rubbing urine onto your body.

A 34-year-old man in England, who drinks his own urine daily, has claimed that the bizarre practice has “cured” him of his depression and made him look 10 years younger. According to New York Post, Harry Matadeen from Hampshire began consuming his own urine in 2016 because he was “desperate” to heal his mental issues. He revealed that after he began ‘urine therapy’, he felt a new sense of peace, calm and determination, following which he became an advocate for drinking your own urine.

“It was beyond my wildest imaginations how powerful it was when I drank it,” Mr Matadeen told Jam Press, as quoted by the Post. “From the moment I drank the urine, it woke up my brain and removed my depression. I felt a new sense of peace, calm and determination,” he further said, adding, “I thought, ‘Wow, I can make it for free and always keep myself in this happy state.’”

Mr Matadeen drinks around 200ml of his own urine every day. As per the report, the 34-year-old’s daily drink often consists of month-old urine topped off with a splash of fresh pee. He swears that his urine is “super clean” and explained that fresh pee is often neutral smelling and not a bad taste unless you are really toxic.

Further, Mr Matadeen went on to say that the aged urine is mostly smelly and the taste is a “refined and acquired one”. However, he added that he actually likes the smell and taste of his aged urine because of the “benefits and joy” it brings him after he takes it into his system.

As per the Post, Mr Matadeen also revealed that he just doesn’t consume his urine but also massages it into his face as a moisturiser. “Urine has made me look a lot younger. Drinking the aged urine has revitalized my face to its youthful years and when I rub it on my face, the difference is instant and obvious,” he claimed. “My skin is young, soft and glowing. Aged urine is the best food for the skin that I have found to date. When you rub it on, it softens the skin and keeps it youthful and elastic. I don’t use any other skincare other than urine,” he added.

However, the 34-year-old also said that not all of the effects of ‘urine therapy’ have been positive. He said that his family “never approved” of his “disgusting” habit and his sister even cased communicating with him. But he also does have people close to him who he can count on for support.

Meanwhile, it is to mention that according to the Post, there are no known health benefits from either drinking or rubbing your own urine onto your body. In fact, UK doctor Jeff Foster has explained that drinking your own urine is “much worse” and can actually speed up the dehydration process and potentially introduce bacteria.