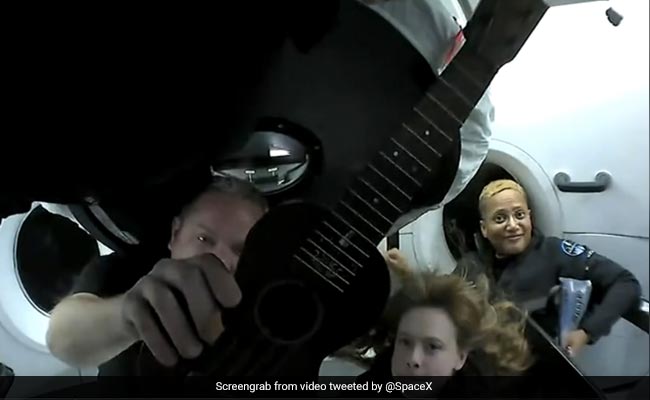 SpaceX: Inspiration4 blasted off on Wednesday from the Kennedy Space Center.

A 42-year-old data engineer on the first all-civilian astronaut crew to reach orbit made some spaceflight history on Friday, with a zero-gravity ukulele performance in a SpaceX capsule hundreds of miles above Earth’s surface.

Chris Sembroski, a Lockheed Martin employee and US Air Force veteran, strummed a few chords for home-bound viewers during a 10-minute show-and-tell session by the four-member Inspiration4 team as they flew at about 17,500 miles per hour (28,000 km per hour) over Europe.

SpaceX, the private rocketship company owned by high-tech mogul and Tesla Inc electric automaker CEO Elon Musk, announced afterward that the crew was expected to return to Earth on Saturday. Splashdown was set for just after 7 pm EDT (2300 GMT) in the Atlantic off Florida’s coast, the company said.

To prepare for the re-entry and return, the spacecraft completed two rocket “burns” on Friday to reduce altitude and line up the capsule’s trajectory with the landing site.

The astronauts spent much of their first 48 hours aloft schmoozing from space, including phone calls with family, friends and supporters such as Musk and Hollywood star Tom Cruise, mission officials said.

They also appeared by video linkup on the New York Stock Exchange on Friday for the ringing of the closing bell.

Friday’s orbital appearance aboard the Crew Dragon capsule was livestreamed over the YouTube channel of SpaceX, which supplied the spacecraft, launched it from Florida and operated it from the company’s suburban Los Angeles headquarters.

‘A Champ At Spinning’

Sembroski was not alone in demonstrating spaceflight pastimes.

Geoscientist and former NASA astronaut candidate Sian Proctor, 51, showed off a piece of her in-orbit artwork – a drawing rendered in metallic markers that she described as depicting the Crew Dragon capsule being carried away from Earth by an actual dragon.

Hayley Arceneaux, 29, a physician assistant at St. Jude Children’s Research Center in Tennessee, where she was once a childhood cancer patient herself, delighted in twirling about the cabin to give viewers a feel for microgravity.

“Hayley is a champ at spinning. She’s been spinning from the moment we got in orbit,” Proctor said.

An attempt to show off spectacular views of Earth through the capsule’s wide observation dome, or cupola, was more disappointing as the spacecraft flew into Earth’s own shadow, though Proctor said she could see an aurora borealis display in the darkened sky below. It did not show up well on camera for viewers.

Arceneaux also showed off a small plush-toy dog in a white coat, which the crew uses as its zero-gravity environment indicator. When it floats free in the cabin, they know they are in zero-G. The toy is loosely modeled after one of the golden retrievers serving as comfort dogs for young St. Jude patients.

Replicas of the zero-G dog are being sold to raise money for St. Jude as part of the larger Inspiration4 charity mission conceived by Isaacman to benefit the cancer institute.

Inspiration4 blasted off on Wednesday from the Kennedy Space Center in Cape Canaveral atop a SpaceX Falcon 9 rocket. Within three hours the crew capsule had reached a cruising orbital altitude of just over 363 miles (585 km) – higher than the International Space Station or Hubble Space Telescope, and the farthest any human has flown from Earth since NASA’s Apollo moon program ended in 1972.

The SpaceX launch marked a leap ahead of competitors Virgin Galactic and Blue Origin, which are likewise offering rides on rocket ships to customers willing to pay a small fortune.