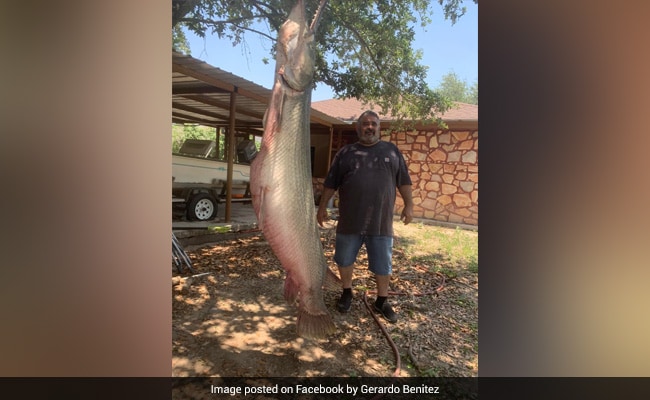 Using a bow and arrow, a fisherman in Texas, US, recently caught a giant, prehistoric-looking alligator gar.

The fisherman’s brother, Gerardo Benitez, uploaded pictures and a video of the huge 7-foot, 8 inches gar to Facebook. The post shows Edgar, the fisherman who reeled in the monster fish, standing next to his catch on the banks of Falcon Lake in Texas.

In the social media post, Mr Benitez explained that his brother Edgar caught and killed the giant gar using a bow and arrow – a fishing method often used to catch freshwater fish like carp and gar, as well as occasionally sharks and rays in the ocean.

“The thing is when you go bow hunting for gar it is not as simple, the gar gives you 1 or 2 seconds the most to get a shot and it’s hard to tell how big it is,” Mr Benitez said in his post.

Since being shared, several people have commented on the Facebook post containing the pictures and video, condemning the kill. “I’m just not convinced that was an ethical harvest. You gotta let those giant breeders go. Also shot with a bow…” wrote one user. Another agreed and said, “They should have let this gar lived. Like what are they gonna do with it? Just take picture and get likes? Gar was already this big. Let him continue to grow.”

Other users wrote, “What a clown move to kill it” and “Breeding gar right there. It should’ve been released.”

According to Newsweek, alligator gars are the largest species of gar and can grow up to 10 feet long. They can also live for a very long time, which can be estimated from the size of the fish. The world record was nearly nine-foot-long and estimated to be over 90 years old.

Alligator gars don’t spawn every year, meaning that their population is slow-growing. With the popularity of alligator gar as a sports fish, there has also been a decline in the population of the fish in their natural ranges, the outlet reported. Conservationists’ concerns about the alligator gar populations have led them to be protected by law in parts of its range.