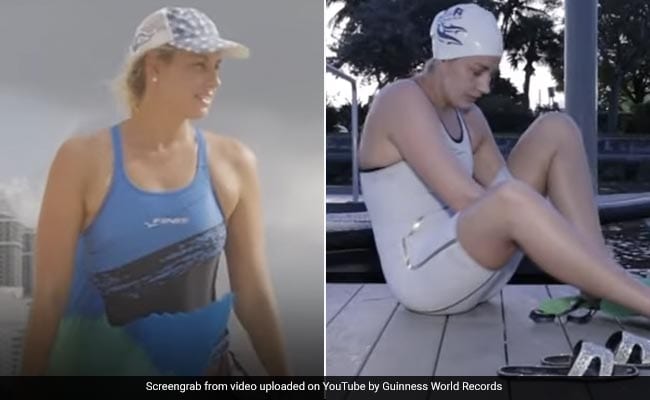 A Florida woman known as the “Eco Mermaid” broke a Guinness World Record by swimming 42.2 kilometres in the ocean wearing a monofin.

According to Guinness Book Of World Records, On May 7, 2022, observers watched as Miami Eco Mermaid Merle Liivand broke her own record for the longest monofin swim by swimming 42.2 kilometres (26.22 miles) off the stormy seas of Miami Beach, Florida, USA, in under 11 hours and 54 minutes.

“It’s not often we catch a glimpse of a real-life mermaid, but in shellebration of World Ocean Day, the world got to sea one in action,” GWR said.

More than a professional swimmer, the four-time world record holder is a marine conservationist and aquapreneur working to rescue the ocean.

Merle Liivand is native from Tallinn, Estonia. She is an ice swimmer and former Baltic Champion who was shifted to Florida 11 years ago.

The Eco Mermaid achieved the record for the farthest swim with a monofin on April 17, 2021, however she afterwards admitted that the conditions were not optimal at the time and that she knew she could go much further.

“I was born with auto-immune health problems, and I started swimming because my lungs collapsed,” Liivand told Guinness World Records. “Today, my intention is to fight for Mother Earth’s lungs.”

According to GWR, she spends her time teaching others how to swim and raising awareness about the harm that our seas are causing.

What makes the clean ocean advocate stand out is that she frequently swims without using her arms in order to improve endurance and raise awareness for the seas, GWR further said.