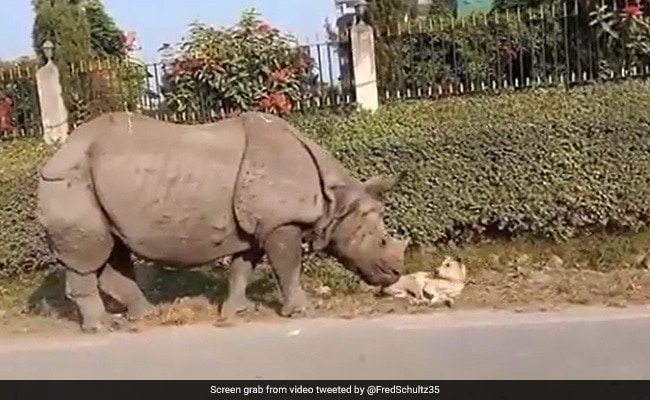 The now-viral video was posted to Twitter on November 15.

No nation in the world has ever had a good situation for stray dogs. Their lives are defined by a lack of food, living in fear, and with no place to call home. Despite of this, they occasionally make us feel happy with their antics, behaviour, and longing for human love.

A humorous interaction between a rhino and a street dog is seen in a video that is going viral and making people laugh on social media. The opening scene of the video shows a rhinoceros strolling by a sleeping street dog. After reaching close to the dog, the rhino lowers its head and tries to poke it with the horn. Just then, the dozing dog opens its eyes and runs away after spotting the enormous creature. The now-viral video was posted to Twitter by a handle called Fred Schultz on November 15. This video is just too good to miss.

Would definitely get your blood pumping waking up to that…😳🤣🦏🦮 pic.twitter.com/fW6FK7tY5g

The video has been captioned, “That would definitely get your blood pumping waking up to that.” The video has received over 4.5 million views, 25,000 retweets, and over 184,000 likes on the microblogging site since it was shared.

The social media users posted a number of insightful remarks in the comment section.

“I think someone took the “I Want a Hippopotamus for Christmas” song a bit too literally, but off just a bit,” said one user.

“Rhino, are you okay?” “Dog: Sir, this is the most terrifying moment in my life,” a second user jokingly said.

“It is a close encounter, but dogs are used to rhinos walking in the streets of these places in Assam, India,” wrote the third user.