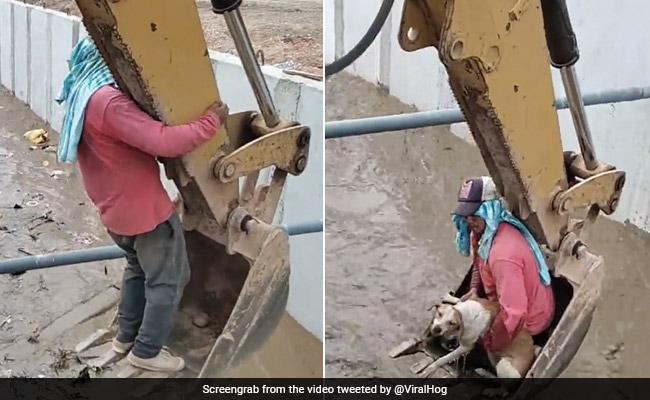 The video has been viewed over 8 million times.

A construction worker in Ecuador has set an example for humanity by rescuing a dog from a canal with the help of an excavator. The video shared by Viral Hog has touched the hearts of internet users as it shows the construction worker saving the dog with great skill and wisdom.

“A construction crews steps in to save a dog that fell into the irrigation canal,” read the caption of the post.

A construction crews steps in to save a dog that fell into the irrigation canal. ???????????? #viralhog#animalrescue#ecuadorpic.twitter.com/ePhgP1dXfl

Since shared, the video has taken the internet by storm. It opens to show a person climbing on the bucket of the digging crane, which takes him down to the middle of the canal. After waiting for a few seconds for the dog to come near, the man then grabs the pooch and puts it in the machine with him. The construction worker, without caring for his life, saved the dog by pulling it out of the drain despite the heavy flow of the water.

With millions of views, internet users have praised the courage and humanity of the worker. One user wrote, “As a man, I can say this choked me up. Thank you guys, I would hug you all.” Another said, “That was stressful just watching. Amazing rescue!” “Nature protects us only if we protect nature. And this coworker did a great job,” added third.

Meanwhile, in another heartwarming incident, a dog, which was lost for days due to violence in the Ukraine city of Bucha, was recently reunited. As Russians moved to occupy Bucha, a husky dog got separated from its owner. When the city was recaptured by Ukraine, the Kastus Kalinouski Battalion – a Belarusian unit fighting with Ukraine – found the dog wandering in the streets. They saved the husky, named it Nessie and set out to locate its owner. And they even succeed in doing that.