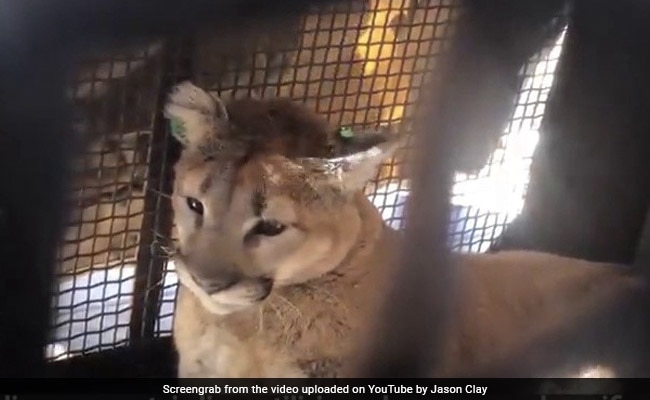 A mountain lion was rescued from underneath a porch in Colorado.

The video of a dramatic rescue of a mountain lion hiding underneath a porch of a home in the US state of Colorado has emerged online. The lion was found by the homeowner’s dog on Sunday and the family called wildlife officers to rescue the big cat, reports UPI. The homeowner was alerted by the dog about something hiding inside the porch and the family expected to find a raccoon but what they saw after flashing a light startled them. They immediately called the Colorado Parks and Wildlife officers to rescue and relocate it. It was a difficult operation as the wild cat was hiding deep inside and there was not much space to manoeuvre. There was only so much space to allow only one person to lay inside.

“It’s a big cat,” said one of the rescuers as the lion got aggressive when poked with a jab pole to tranquillise it. Some tense moments followed. The mountain lion’s eyes glowed, turning the situation more frightening.

Rescuers were finally able to pull the lion out of the porch and relocate it to an uninhabited area in southwest Larimer County.

Several people have commented on the video, which has received nearly 4,000 views in the past 24 hours. While some said they were happy that the lion was rescued and relocated, others praised the wildlife officers for handling the situation “wonderfully”.

“So glad he could be safely relocated. I love these cats, yes, caution is important…but man…are they magnificent animals,” said a user.

A person said jokingly he would’ve rather allowed the wild animal to stay there. “I would’ve just let him stay. He looked comfortable,” he wrote.

Wildlife officer Tyler Asnicar said in a statement that the lion was caught in a populated area in Boulder locality and it “is not a good situation” to have a big predator close to so many people.