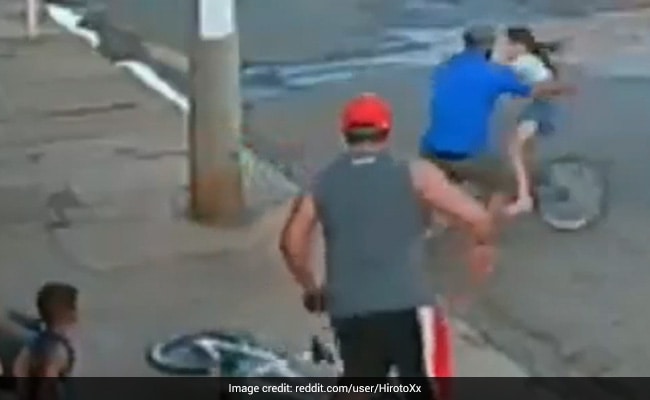 Social media users are praising the man for his quick thinking.

A man is being praised on social media for saving a girl on a bicycle from hitting a pole on the street. His quick thinking saved the youngster in the nick of time from what could have been a fatal accident. A video of the incident is going viral on the internet, with users calling him a savior and equating him with Jesus Christ. The location where the video has been shot is not known. On Reddit alone, it has received more than 82,000 votes.

The video shows the man in a blue t-shirt and on a bicycle talking to his friends a pavement near the road. He suddenly turns around his head, appearing to her something (most probably the girl’s scream) and jumps from his bicycle.

Before others could understand anything, the man runs a few steps and grabs a girl coming towards him on a bicycle in high speed. The spot where he caught the girl is inches away from a street pole seen in the video.

The girl’s bicycle lands on the pavement and she escaped unhurt.

The video first runs in normal speed, then in zoomed in mode and in slow motion to focus on the heroic attempt of the man. Other people are also seen rushing towards the girl to check if she is all right.

Users on Reddit have praised the quick thinking of the man.

“This guy hella deserves a lot more than what he got from internet fame. Dude saved her like, her teeth, her face,” one user commented. “Most definitely nice reflexes,” said another.

“Christ on a bike that guy saved that girl on a bike!” a third user commented.