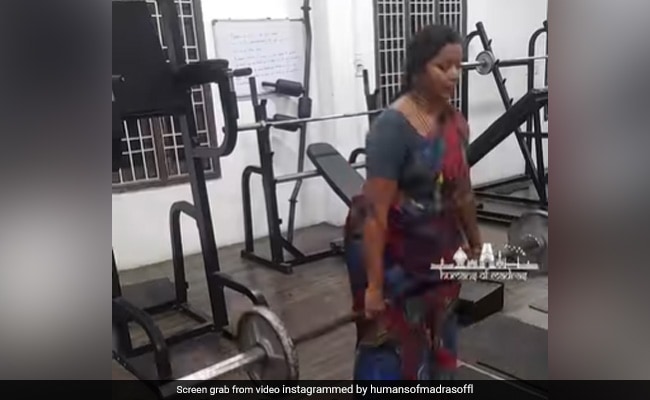 She lifts heavy weights and uses other gym machines and equipment, all of it while wearing a saree.

The key to ageing well is developing healthy habits, such as regular exercise and a balanced diet. As one grows older, it becomes even more essential to inculcate habits that keep you strong and active. Recently, a 56-year-old woman from Chennai shared her inspirational story on how she keeps herself fit despite health challenges.

In a video shared on Instagram jointly by Humans of Madras and Madras Barbell, the 56-year-old woman is seen working out in the gym. She is also seen lifting heavy weights and dumbbells and various other gym machines and equipment, all of it while wearing a saree. The woman is working out with her daughter-in-law. Towards the end of the video, she is also honoured by the staff members along with other women in the gym.

The video also has text supers which read, “I’m 56 now and still continue to work out. Even your attire shouldn’t stop you from doing what you wish to do! My daughter-in-law and I work out regularly. I was 52 when I first hit the gym. It all started when I was diagnosed with severe knee and leg pain.”

“My son researched a lot about the treatment and suggested me to start doing exercise. He owns a gym Madras Barbell. I, with my daughter-in-law, do powerlifting, squats, etc. Yes, it cured my pain. We, as a family, keep our bodies fit and healthy,” it further read.

The video was shared a wEek ago and has been captioned, “She’s 56. So what? She wears a saree and casually does powerlifting & pushups! Age is just a number – rightly proves one of the powerful, (young by heart), inspiring mothers-in-law. Her dedicated & supportive daughter-in-law works out with her regularly too. Isn’t this called ‘growing with each other’? How inspiring is this to watch!”

Since being shared, the video has received over 1.1 million views and 72,000 likes. Many users were left awestruck looking at the inspiring journey.

Also Read: Woman Loses 62 Kg After Getting Stuck On A Slide In Front Of Her Son

“This is the best inspiration anyone can have and not just inspiring but also breaking every stereotypes that is set for women and more specifically about how to never judge a book by its cover. Best wishes to Aunty,” said one user.

A second user said, “This is by far the best story I have heard in a while! I hope many many more ladies will be inspired by this post and prioritize their health and physical well-being.”

“This is called being progressive… Instead of kitchen politics she and her daughter in law are doing something healthy… Atleast we can learn from them,” said a third person.

Shilpa Shetty Was Spotted In The City Looking Like This