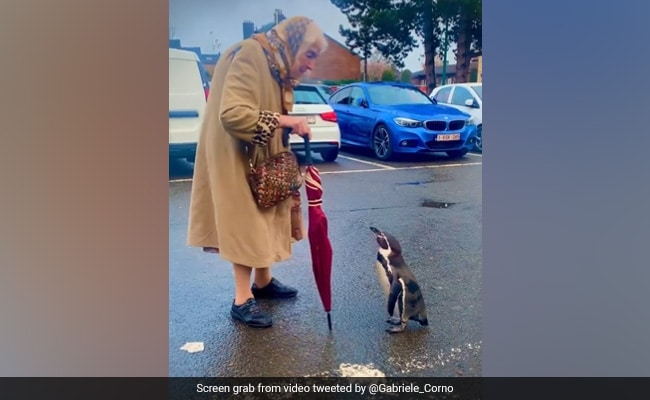 The video shows the bird following the lady everywhere she goes

With their hilarious antics and adorable gait, penguins never fail to amuse humans. One such sweet video of a curious penguin having a wholesome interaction with an elderly woman has surfaced on the internet, tugging at our heartstrings. An internet user named Gabriele Corno shared the cute video on Twitter, with a caption that reads, ”Exchange of views in a parking lot.” Though the exact location of the video is not known, the clip seems to have been recorded at a parking lot somewhere in France.

Exchange of views in a parking lot pic.twitter.com/JPWVDI7JC9

The one-minute video opens to show a penguin waddling and walking up to an elderly woman. The penguin curiously watches the woman and stares at the red umbrella that she was holding in her hands. The woman, in turn, talks to the penguin sweetly in French and it seems that the bird was listening to her intently. As the clip progresses, it also shows the bird following the lady everywhere she goes.

The video has gone viral and people couldn’t get over the wholesome interaction between the bird and its human friend. People were also curious to know what the woman was saying to the bird. Others wondered what the penguin was doing in a parking lot.

One user translated her words which roughly reads as, ”Oh, you’re so beautiful. I love you. You’re my bestie. I love you so much. Here’s a kiss. You’re beautiful. You’re the one I like best around here. What do you want with my umbrella? You’re going to be here tomorrow? I’ll see you again tomorrow.”

Since being shared, the video has garnered more than 7 lakh views, more than 27,000 views, and close to 4300 retweets so far, and the numbers are only increasing.

One user wrote, ”This is adorable but I also believe the bird just thinks her umbrella is a fine looking penguin.” Another commented, ” This needs to be a TV show-an old lady and her penguin friend go on epic adventures!” A third said, ” Ah, so sweet! The little lady spoke slowly enough that I could understand “I love you” and “kisses.” Another wrote, ” That is PRECIOUS!! Nothing on earth is cuter than penguins and this little lady too !!”