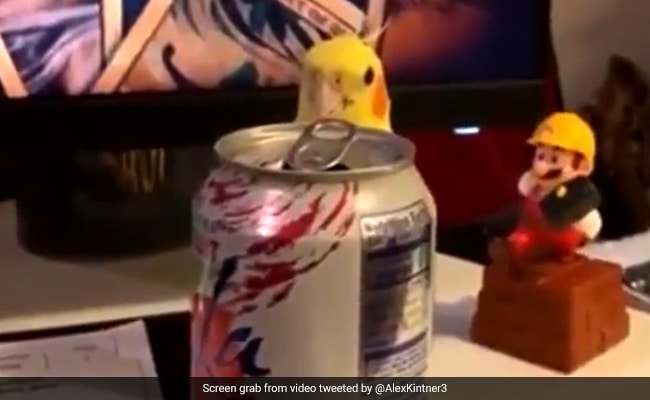 The clip is too cute to be missed.

Animal videos are some of the most engaging and fascinating on social media. And now one such hilarious video of a duckling playing with a woman is winning the hearts of everyone on social media.

Internet user Alex M. Kintner posted a video of a little yellow bird playing with its owner on Twitter. The bird can be seen lurking behind a soda can at the beginning of the video. The bird hides behind the can and says peekaboo in the funniest way as the video continues further on. The video was shared on November 21 and since then it has amassed over a lakh likes and two million views. It has also been retweeted 25,000 times. The clip is too cute to be missed.

I’ve watched this on an endless loop for 15 minutes. pic.twitter.com/M9PXZayZXj

“This may be the best thing I have watched on the internet. Ever,” said one user.

“I am CRYING here. Sound on,” commented another person.

A third person said, “Try not to laugh or smile. What a character!”

“If this doesn’t make you smile nothing will,” said another user on the social media platform.

“I had no idea what to expect, but it wasn’t that and now I’m truly delighted. Please excuse me while I go watch it again,” commented another person.

A few weeks ago, five chicks and a young monkey were seen enjoying themselves. At the beginning of the video, all the young animals were seen sitting on the grass and eating twigs. Eventually, all of them doze off. In a very special moment captured in the clip, two chicks are then seen sleeping on the monkey. Later, all of them seem to be running behind each other.