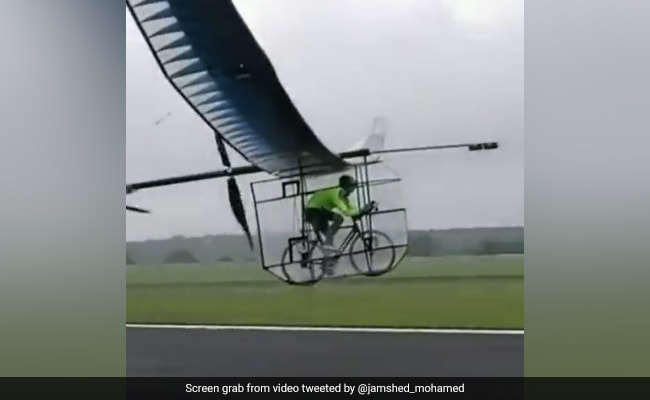 The location of the undated video is yet to be known.

A video showing a group of people working on a ‘flying bicycle’ is gaining traction on social media. The short clip was shared on Twitter on Sunday by a user named Mohamed Jamshed. It showed a man attempting to achieve flight by peddling a bicycle that is inside a transparent box and is connected to aeroplane-like wings.

“This guy just tried to fly a plane while riding a bicycle! Talk about multi-tasking!” Mr Jamshed wrote in the caption of the post, which has accumulated more than 169,000 views and over 6,300 likes.

This guy just tried to fly a plane while riding a bicycle! Talk about multi-tasking! #crazy#aviationpic.twitter.com/3CtrzWI6G9

The short clip showed a transparent square enclosure supported by plane-like wings and fans, and a person peddling a bicycle inside it. A man is also seen running along the makeshift aviation machine as the cyclist inside catches speed. Seconds later, the machine is then seen taking off, supposedly with the help of the power generated by cycling and it stays in the air for some time before hitting the ground.

Since being shared, the video has created quite a buzz on social media. “Good…but needs more Power..not possible with only human feet..good effort and design.. needs some engine or electric motor,” wrote one user. “I think this can work. Only a small change in the gears should do the trick,” said another.

“Let the Man-Rider Sprout Wings as he speeds along and flies in abandon and with no hurdles to his imagination.!!!” commented a third. “It would have been better to use an electric motor instead of cycling,” suggested fourth.

The location of the undated video is yet to be known.