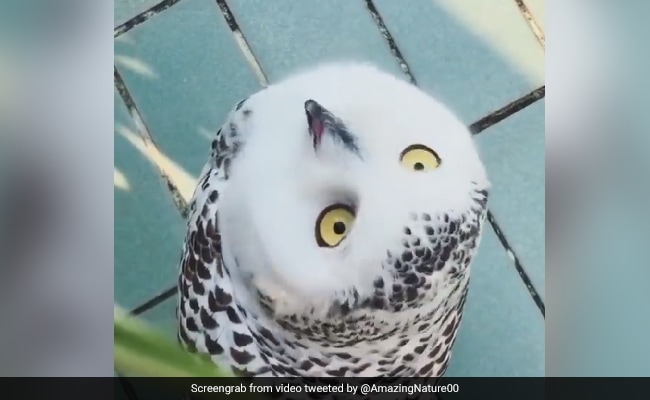 The owl seen in the video is a ‘snowy owl’, like Harry Potter’s pet bird Hedwig.

The video of an owl turning its head upside down has shocked the internet. The video has been shared by Amazing Nature on Twitter and is going viral.

The flexibility of its neck enables an owl to move around its neck at great angles. And this white owl has made the full use of its ability.

In the video, the owl is seen rotating its neck as far as it can, continuously looking at the camera. The bird’s yellow eyes stay wide open through the entire motion, inviting hilarious comments from social media users.

“I need this guy sitting on my car roof when i am reverse parking,” a user tweeted.

“How does it remember the right position of the head?” another user posted on Twitter.

Since being posted on April 6, it has been viewed more than 2.37 lakh times.

Owls have a special ability to turn their head to great extent – upto 270 degrees. They are able to do it because of a smart bone and vascular structures running along its neck and into its skull, according to scientists.

These features keep the blood flowing even when the head is swivelled up to 270 degrees.

According to National Geographic, humans and some other animals can only move their eyes to follow objects or use peripheral vision to scan an area. Owls, on the other hand, have to turn their heads for the same effect. This happens because owls have fixed eye sockets, which means their eyeballs can’t rotate, said Nat Geo.

This forces these birds to stretch their neck displaying Exorcist-style display of flexibility without breaking blood vessels or tearing tendons.