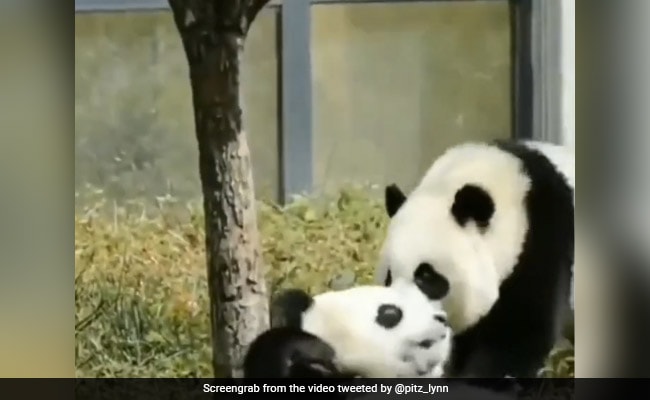 A group of Pandas climbing trees, slipping, falling and goofing around.

There is nothing better than watching wild animals playing and enjoying in their natural habitat. One such video shows a group of Pandas goofing around, and is becoming popular on the internet.

“Pandas.. they can’t survive in wild, or can they?” says the video posted by Buitengebieden on Twitter.

Pandas.. they can’t survive in wild, or can they? ????‍♂️ pic.twitter.com/5H4mCkQdyV

In the video, the pandas can be seen climbing trees, slipping, falling and rolling down again and again. Their cuddly and chubby bodies and short limbs allow these pandas to roll on the ground easily. Pandas though are known to be expert climbers, even on trees.

People enjoy watching pandas continuing with their day-to-day chores because of their playfulness. This video has received over 42,000 likes and 674,000 views and is sure to bring a smile on your face as well.

“I can’t stop watching the loop,” one user commented on Twitter. “I feel like I’m watching myself,” said another.

“Fun is more important than survival,” commented a third user.

Called panda bear, these bearlike mammals are found in the bamboo forests in the mountains of central China. Their striking coat of black and white, combined with a bulky body and round face, give pandas a captivating appearance that has endeared it to people worldwide.

According to the IUCN Red List of Threatened Species, less than 1,900 pandas are thought to remain in the wild.

While female pandas as smaller, large males can attain a height of 1.8 metres (6 feet) and weigh more than 100 kg, according to Encyclopedia Britannica.

As much as 90–98 per cent of the panda’s diet consists of the leaves, shoots and stems of bamboo.