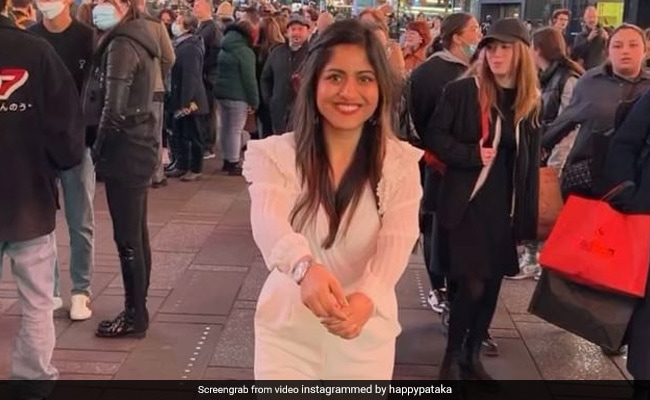 A video of a woman dancing to Bollywood music at New York’s Time Square is going viral on the internet. The woman begins dancing to Badshah’s “Tere Naal Nachna” and is soon joined by a bunch of strangers, who were passing by. Since being posted on April 1 on Instagram, the video has been liked by more than 2.2 million users.

The song is from 2018 movie ‘Nawabzaade‘ and features Athiya Shetty. Initially, the passers-by giggled and tried to understand what was happening. Soon, the catchy tune of the music made them groove along with the fashion blogger Puja Jaiswal, who shared the video.

Jaiswal is based in San Francisco according to her Instagram bio.

Netizens were quick to react to the popular video as soon as it was shared. ‘’Wow this is really cool, I wish I could join this too,” a user commented on Instagram. Other users also admired the video, reacting with happiness in their heart that how lovely it was seeing the strangers joining Bollywood music dance.

Last month, Saminder Singh Dhindsa – a college student from India – danced his way into the hearts of social media users when he joined a group of people dancing on a sidewalk in Miami, Florida.

The footage was shared by Mr Dhindsa on Instagram. It showed him approaching a group of hip hop dancers on a sidewalk in Miami. On being encouraged to join them, he broke into an impromptu dance that elicited cheers from the audience.

Other people were seen filming the scene and cheering.