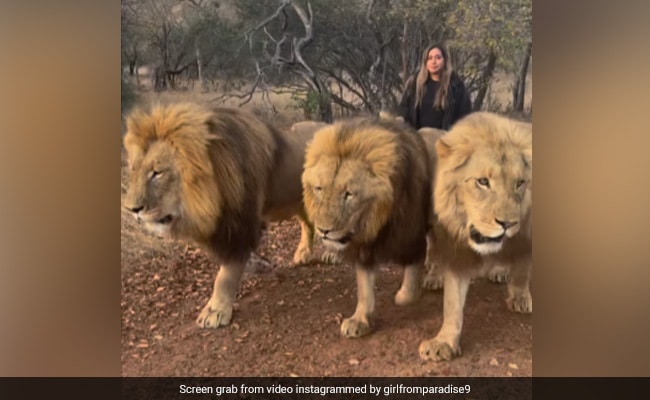 The video has triggered an array of reactions.

A video of a woman casually taking a walk with three lions has gone viral on the internet. Posted by a content creator, Jen, the clip shows her walking around in a jungle behind three lions as if they are her pet dogs. What’s the best part? The wild cats are equally comfortable with her being around.

Jen’s social media is filled with videos and pictures of her encounters with wild animals. The video shows three majestic wild cats walking in a forest with Jen following their lead. However, the woman is not scared by the presence of the wild beasts.

The video was posted on November 12 and since then the clip has garnered more than 6 million views on Instagram with 2 lakh likes. The video has triggered an array of reactions. A user wrote, “She must be a very special human for these three to allow her to walk with them.”

Another user wrote, “They trust you as one of them to walk among the pride is the next step to god himself.” The third user commented, “very brave. You can tame a lion but they still have that animal instinct and just like the tiger who was tamed and his trainer the magician. At any moment those lions could turn and in 1 sec could rip you in half. Half brave half stupidity.”

“Keep in mind wild animals don’t habitat with us for a reason. They can become violent without being provoked,” the fourth expressed.