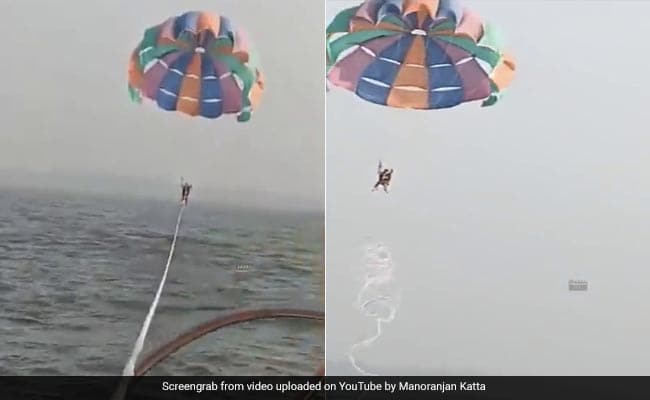 A parasailing accident in Alibaug was caught on camera.

For two women, parasailing in Alibaug turned disastrous when the rope keeping them attached to the boat snapped and sent them hurtling to the sea. The women, residents of Mumbai’s Sakinaka, had arrived in the coastal town of Maharashtra for sightseeing on November 27. Sujata Narkar and Surekha Panikar decided to try parasailing while on a beach in Alibaug, according to Maharashtra Times.

According to Jansatta, the women were visiting Varsoli beach when they saw a few tourists parasailing and decided to give it a try.

However, their parasailing experience took a terrifying turn when the rope snapped and sent them plunging into the water below. The women were both wearing life jackets which helped them stay afloat until help arrived. They were

The incident was captured on camera and the footage has been viewed millions of times on social media. Watch it below:

The video has once again raised concerns about the safety measures taken by operators who offer adventure sport services. In the comments section of the video, many called for action to be taken against operators for using equipment that does not meet safety standards.

Last month, something similar happened to a couple parasailing off the coast of Diu when the rope of their parachute snapped and sent them falling into water. Ajit Kathad, 30, and his wife Sarla Kathad, 31, were parasailing off the Nagoa beach in Diu when the rope snap sent them plunging into the sea. The couple was rescued unharmed by lifeguards deployed at the beach.