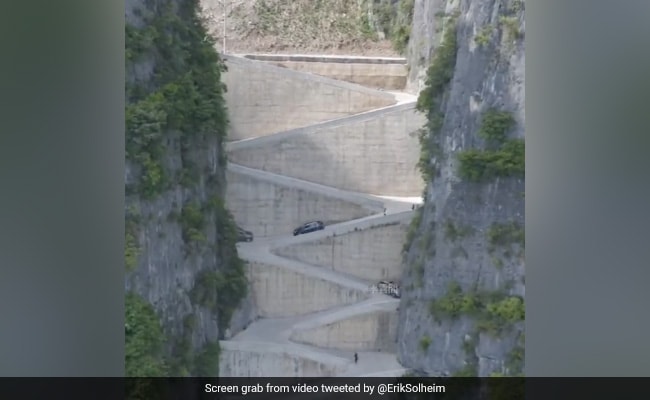 The video garnered more than 23,000 views and hundreds of likes and comments.

A video showing a Chinese road made of several sharp turns is gaining traction on social media. The clip was shared on Twitter on Tuesday morning by Norwegian diplomat Erik Solheim, and within a few hours, it garnered more than 23,000 views and hundreds of likes and comments.

“Mountain roads in Chongqing, China!,” Mr Solheim wrote in the caption of the post.

In the short clip, cars are seen carefully navigating one bend after another. The steep road seems to have been built between two mountains and appears to be made of concrete rather than the usual asphalt. The video also showed different views of the road, and it is equally terrifying as well as beautiful.

The video left internet users stunned. While some users found the video terrifying, others found it beautiful. “Exciting as well as horrible,” wrote one user. “That reminds me #rangerover challenge,” said another.

A third user commented, “That’s is interesting. Better on a motorbike, just don’t be drunk.” A fourth added, “That looks difficult to navigate, bet there’s been move than a few fender benders in there.”

Meanwhile, speaking of China, a while back a video of Chinese driving test surfaced on social media and left netizens stunned. The short clip was shared on Twitter by user Tansu Yegen on Friday, with the caption, “Driver license exam station in China”.

The video showed the vehicle starting with the zig-zag track and ending the driver parallel parking, which is considered to be one of the hardest skills for new drivers. The video accumulated more than 10 million views and nearly 180,000 likes.