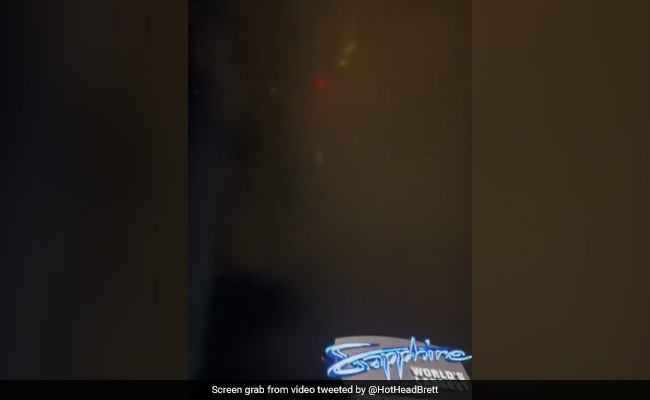 People in Las Vegas, United States, were perplexed after spotting red and white lights shining in the night sky. Taking to Twitter, user Brett Feinstein shared a video of the incident and wrote, “There is a #ufo above Sapphire Las Vegas right now!”

From the parking lot of a club in Las Vegas, Mr Feinstein filmed what appeared to be groups of white and red lights shining in the clouds. “Honestly, this is really strange. I mean we’re here every night. I’ve never seen anything like this,” someone can be heard saying in the background of the video.

There is a #ufo above Sapphire Las Vegas right now! pic.twitter.com/09uxskLiqm

“UFO above them in Las Vegas,” wrote another user while sharing a short clip of the strange event.

Ufo above them in Las Vegas 🚀 pic.twitter.com/IPt7TXf3lj

People who recorded the event speculated it was a UFO – Unidentified flying object – hovering about the club. In the comment section of the posts, internet users also agreed that it was indeed a UFO.

“Def wild cause it’s reflecting the light when it hits it! That def something up there,” wrote one Twitter user. “What happens in Vegas stays in Vegas, unless you see a UFO then you don’t stay in Vegas,” jokingly added another.

A third user commented, “There is a while light that flashes (in response?) Every time the spotlights cross the center. Great capture!! Mega weird,” while a fourth user added, “I imagine these could be drones? The oblong shapes are super bizarre though.”

However, according to The Hill, experts explained that the strange lights were probably just a weather phenomenon. A meteorologist at the National Weather Service (NWS) in Las Vegas said that since the lights in the clouds did not appear to move, and the temperature in the clouds was cold enough, there is a good chance what people saw was a phenomenon known as “light pillars”.

“Long pillars of multicolored light streaking the sky seem like the perfect backdrop for impending alien invasion, but in reality, light pillars are a common effect that can be found all over the world,” the NWS explained on its website.

“They do come from above–not extraterrestrials, but tiny crystals of ice hanging in the atmosphere. Ice is very thin, shaped like plates with hexagonal faces. When ice drifts down through the air, it falls close to horizontally. At the top and bottom are the faces with more area. Ice is very reflective, so when light hits those wider faces, it bounces around and reflects off more ice crystals. That means we get these vertically stacked mirrors floating in the atmosphere,” it added.

So what people witnessed in Las Vegas last week was simply the brilliant light from the city being refracted by weather activity in the sky.