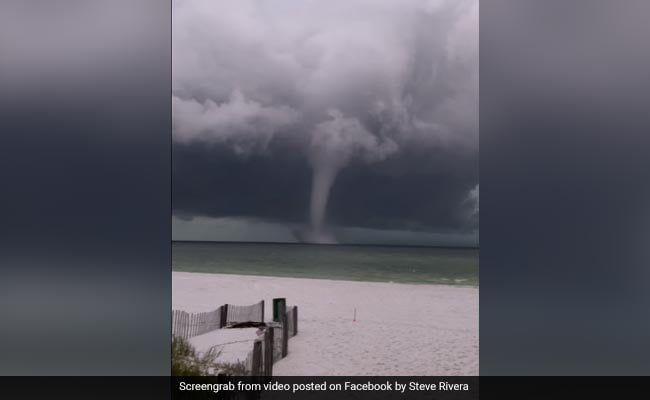 Several videos of these waterspouts have been circulating on social media.

Stunning videos of waterspouts in United States’ Florida are going viral on social media. These waterspouts, also known tornado over water, were formed on Tuesday by severe thunderstorms in northwest Florida. The natural phenomenon often amazes people and sometimes also moves from land to water. The amazing sight was captured by locals on a beach and another one from an apartment located in the area. The videos show multiple lightning strikes near the waterspout, as well as looming storm clouds.

One of the Instagram videos, which according to CBS News was recorded on a beach in Destin on Tuesday, pans from a low-hanging dark clouds to a massive tornado-like funnel. It appears to be connecting the ocean and sky.

This waterspout moved away from the shore after forming, and did not touch the land.

Another footage posted on Facebook was also taken on a beach and shows a waterspout on the sea surface. No injuries were reported from these water tornadoes.

According to National Oceanic and Atmospheric Administration (NOAA), a waterspout is a whirling column of air and water mist. It further divided them into two categories – fair weather waterspouts and tornadic waterspouts.

NOAA said that tornadic waterspouts are tornadoes that form over water, or move from land to water. They have the same characteristics as a land tornado. It further said that these waterspouts are associated with severe thunderstorms and are often accompanied by high winds and seas, large hail, and frequent dangerous lightning.

Fair weather waterspouts, on the other hand, are usually formed along the dark flat base of a line of developing cumulus clouds, according to the agency.

While tornadic waterspouts develop downward in a thunderstorm, a fair weather waterspout develops on the surface of the water and works its way upward.