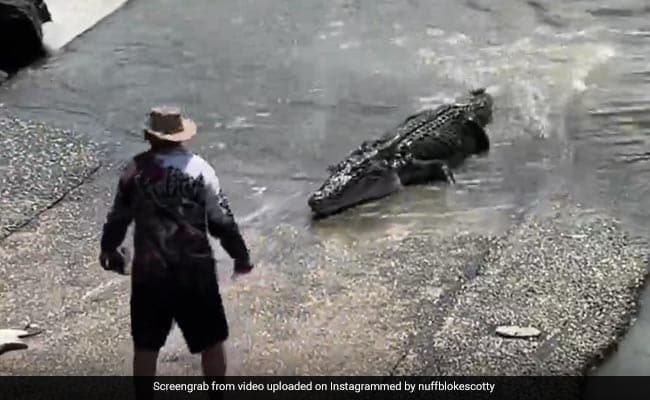 A battle between a man and a four-metre-long crocodile has been captured in an extraordinary video. According to DailyStar, the incident took place in the waters of Chaills Crossing in Kakadu, Australia.

It all started when the crocodile was looking to grab a nearby barramundi fish. But the craziest thing happened when the father walked right up to the crocodile to retrieve his son’s hat, risking life and limb in front of a determined beast.

In the footage, the giant reptile is seen swimming toward the fish it spotted on the end of a fishing line. On the other hand, the fisherman attempts to reel the fish in rather than letting the crocodile eat it.

Viral Video | Mime Calls Out Man For Not Helping Partner, Internet In Stitches

Scott Roscarel refuses to let off the fish and instead redoubles his efforts to reel it in. The crocodile then starts to chase the big barramundi and lands up on the concrete. The fight then intensifies as the enormous creature keeps following.

Seconds into the video, Mr Roscarel is then seen leaping back as he realises that even after manoeuvring the fish to dry land, the croc did not give up. In doing so, he also accidentally kicks his hat close to the four-metre beast, as the crocodile crawls onto the concrete.

Mr Roscarel’s father then bravely goes to get the hat back, even though onlookers are heard screaming “let him have it”. In the end, the father and son duo won the fish and the hat as the crocodile retreated back into the water.

DailyStar reported that the  Mr Roscarel wasn’t actually bothered about the hat. He even told his father that he had “15 at home, but I’ve got one father”. Further, he told the media outlet that after a few barren days of fishing, he was delighted with his catch and the fact that his dad did not get any closer to the giant beast.