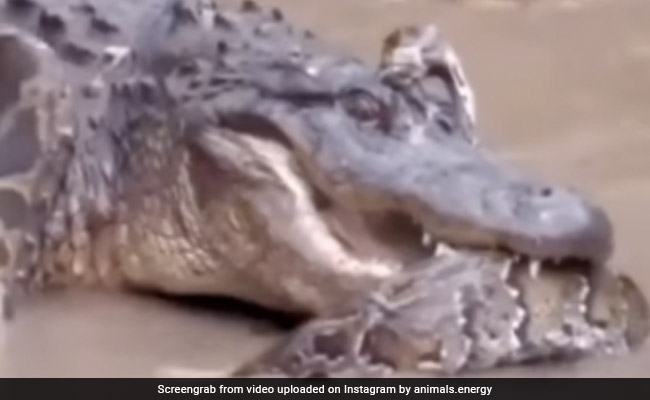 The alligator and the python engaged in an intense fight.

A video is going viral on social media where an alligator is seen keeping a huge python in its mouth and trying to tear it apart.

The video was shared by Animals Energy on Instagram on Wednesday and has received over 10,000 likes and more than 4.5 lakh views so far.

The caption says: “Can a crocodile bite the python into two?”

Pythons are known to wrap themselves around their prey and crushing them – squeezing tighter as the victim exhales.

Both the alligator and the python are members of the same reptile family, and in the video, they seem unwilling to give up, resulting in a brutal face-to-face battle.

However, after some time, the alligator abandons the python when it is unable to kill it and bite it into two pieces.

Users were thrilled to watch the intense fight and made comments on the post.

“Great to see devil vs devil. Whoever die is a blessing,” a user wrote.

“Looks like python win last frame look how the eye of gator is limp when snake rubs it snake won choked him out,” a second user commented.