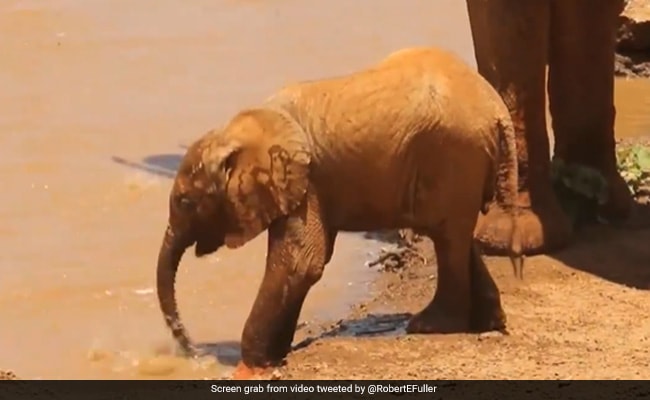 Videos of animals doing adorable things are enough to make your day. One such video is making rounds on the internet that shows a calf learning to drink water using its trunk while mother elephant stands nearby.

Just a baby elephant ???? learning how to use its trunk ????????#worldelephantdaypic.twitter.com/knD6PuaheF

Shared by a user named Robert E Fuller on Twitter on Friday, the video shows the baby elephant splashing water with its trunk while trying to learn how to use the trunk for the purpose. He continues to splash water every time he drinks water from the river, which makes the scene adorable.

“Just a baby elephant. Learning how to use its trunk,” reads the caption.

Since being shared, the video has amassed over 7.4 lakh views and more than 1,400 likes.

Videos of wild animals are frequently shared on social media and are loved by viewers as well.

Recently a video went viral on the internet showed a family of majestic lions. The video was captured in Gujarat’s Gir National Park, which is home to a significant number of Asiatic lions. The big cats were seen unwinding in the jungle in the footage. There are also several cubs in the family, and they were observed having fun.

The video was shared by Indian Forest Officer Parween Kaswan on the occasion of World Lion Day on Twitter. While sharing the video, he wrote, “Here a beautiful family of Kings & Queens from Gir forest of India. Today is World Lion Day.”

The video received over 22,000 views and numerous shared on Twitter.