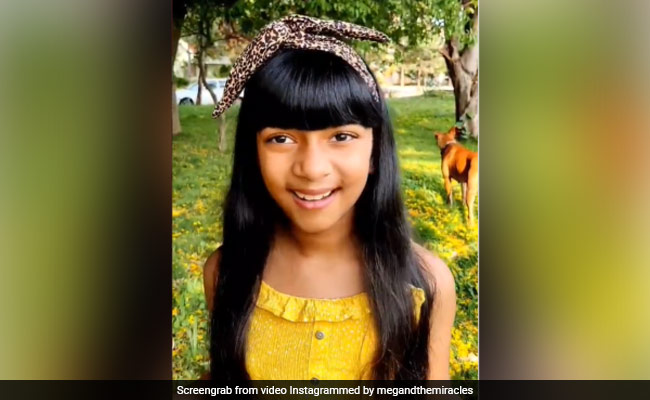 When a TikTok user who goes by the name “Danny B” hosted an online talent show, he probably wasn’t expecting to be blown away by a nine-year-old, but Megan Rakesh, from Bengaluru, managed to do just that. Megan, who has been singing with her father since she was two, took everyone by surprise with her rendition of Fallin‘ by Alicia Keys. Footage that has gone massively viral online shows the talent show hosts reacting in shock and surprise as the nine-year-old girl began singing, while her father accompanied her on the guitar. Her powerful rendition of the Alicia Keys song reached the American singer herself, who gave her a shout-out on her Instagram Story this weekend.

“Alicia Keys shared it,” her parents wrote while sharing the video, adding that their daughter had “dreamt of this moment a million times and the feeling is unreal.”

“Thank You so much @ohitsdannyb for posting this on TIKTOK… (1 Million plus views in 24 hrs),” they added.

Footage of the young singer has gone massively viral on TikTok and Instagram. After it was re-posted by a popular meme page on Instagram, the video collected a whopping 5.6 million views.

In the comments section, hundreds of people showered praise on the nine-year-old.

“My reaction would’ve been the same. She’s a star, you can tell,” another remarked, while a third wrote: “Her voice is making India proud.”

In a follow-up video, Megan thanked Alicia Keys for sharing the video. “Thank You so much for sharing me on your story .. STILL CAN’T BELIEVE…” she said.

According to Deccan Herald, Megan Rakesh was five-year-old when her parents started her YouTube channel. She has performed at venues across Bengaluru and today has a following of over 37,000 on Instagram.