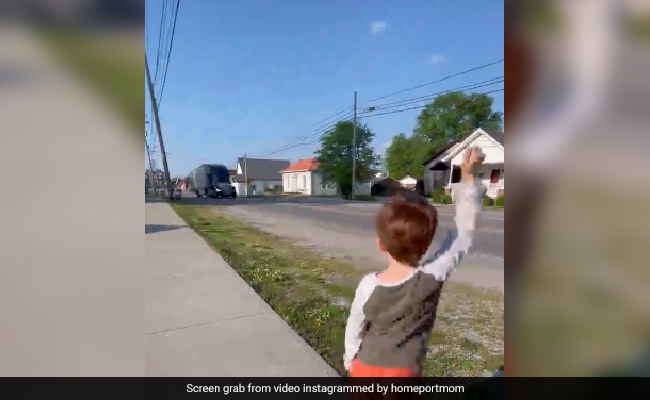 The boy signals to the truckers to honk as they drive by.

A video of a boy giving signal to truckers as they pass by is gaining popularity on the internet. He is overjoyed when he receives a honk in response from the trucks.

The video, shared by Tiffany Davenport on Instagram on May 12, is going viral now.

“He loves to get truckers to honk as they drive by. I think it brings as much joy to the trucker as it does him,” reads the caption.

In the viral video, the toddler can be seen pumping his arm in the air and waving his hands to a passing truck to honk. The trucker makes a nice gesture by honking for the toddler, who is overjoyed and starts to jump. He shouts, “I did it.”

The video has received more than 4 lakh views and over 46,000 likes. People have left heartfelt remarks in the comment section.

A user wrote, “Honestly, 1 of the best feelings ever,” while another said, “I am much older, but my reaction is same as thou as kids.”

Videos of child and their activities are frequently shared on social media and people love to watch their reactions.

A recent video shared by ViralHog on YouTube showed a little girl walking down the street while holding a toy pistol and eating a lollipop. A little puppy was also in the footage, following her around, jumping on her and asking for her attention.

The girl finally stopped, bending down to pet the dog, but in the process lost the lollipop. It was quickly grabbed by the puppy. When she realised about the incident, the girl began to cry while the dog was seen happily enjoying the lollipop.