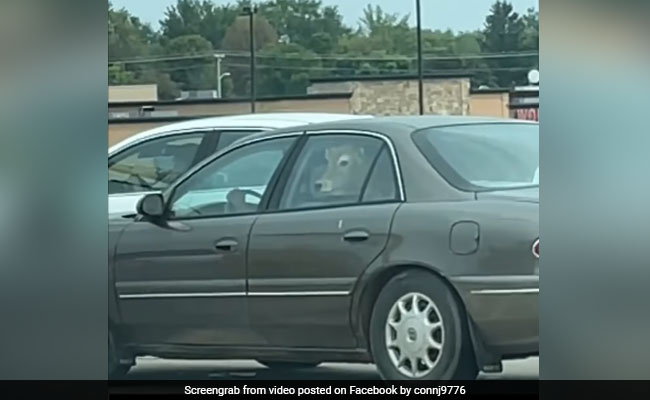 Jessica Nelson spotted a cow sitting inside a car.

Doesn’t spotting a dog stick its neck out from the window of a vehicle make you smile? Well, now replace the dog with a cow. A little bizarre, some would say. But that is exactly what a woman in Wisconsin, USA, saw when she was waiting in the drive-through of a fast-food restaurant. Jessica Nelson was waiting for her turn at the McDonald’s drive-through in Marshfield when she saw something in a sedan car that was waiting just a few spaces ahead of her. She was not prepared for what she saw as she realised that she was looking at a cow seated nonchalantly in the backseat of the vehicle.

As soon as she came to terms with the bizarre sight, Ms Nelson recorded it on her phone and luckily for us, shared it on social media. So, is this a thing that happens in Wisconsin? At least, that is what Ms Nelson thinks, as she shared the video on Facebook. Posting the clip, she wrote, “A whole freaking cow! Tell me you live in Wisconsin without telling me you live in Wisconsin.” The video soon went viral on Facebook and made its way to other social media platforms.

You can watch the video here.

Speaking to The Associated Press, Ms Nelson said, “I thought it was fake at first. Who puts a cow in a Buick?” She added, “Then its whole head moved.” Explaining why she took the video, she said, “I just took the video because I was blown away that there was a cow in the back of a Buick.”

But that’s not all. Ms Nelson later found that the car did not have just one cow. Speaking to CBS, she said, “I found out this morning that there were actually three calves in the back seat of that car. Yeah, two of them were laying down and one of them, the one that you saw, was standing up.”

She added that she had come to understand that the cows were bought at an auction. Adding that she did not know why they were in the backseat of a car, Ms Nelson said that she would “pay more attention to the backseats of cars from now on.”

Reacting to the Facebook post, one user named James Guralski said, “We had to haul our calves in the car or truck back in the day! We’d take out the back seat and put in empty feed bags and then the calves.”

Another user named Kathy Henseler said, “Yup, that is in Marshfield and supposedly there were three calves in the back seat. Guess they wanted French fries.”

“That’s my hometown! How I miss u Marshfield,” added a user named Jessica Sharae. “Hahaha! Seeing this and thinking, ‘Yup! That could totally happen where I live.’ Then seeing, it is in fact, the McDonald’s drive-through in my hometown,” said a resident Ashley Eberhardt.

Well, we hope the calves had a fun ride.