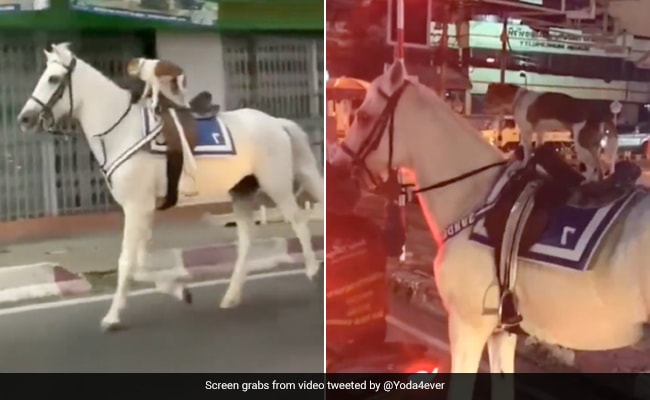 The Internet is full of light-hearted humorous animal content, and of course, dog videos are particularly popular for how they can put a smile on anyone’s face. One such video going viral now is that of a dog riding a horse.

Shared on Twitter, the short clip shows a pooch happily riding on the back of a horse. The horse, on the other hand, is seen galloping throughout the city and even stopping at a traffic light. “Paw patrol,” read the caption of the post.

The location of the video is yet to be known. The clip is a compilation of three videos. The dog on the saddle appears to be riding the horse by itself without so much as a harness.

Since being shared, the post has left the internet in splits. It has accumulated nearly 400,000 views and more than 20,000 likes.

One user wrote, “I don’t understand what’s happening here but I like it.” Another said, “Why does this make me think it is the plot of a Pixar animated movie?”

A third added, “I’m completely baffled by the saddle, neither animal needs it. Perhaps the dog and a human are going to switch places mid trot down the street.” “Too cute and adorable,” commented fourth.

One user hilarious also compared the scene to “Majnu Bhai’s painting” from the Bollywood movie ‘Welcome‘.

Meanwhile, another dog video had gone viral a while back. Shared on Twitter, the clip showed a labrador opening a tap with its mouth to drink water, and after quenching its thirst, the pooch was also seen turning the tap off smartly. The internet was impressed by the dog’s sensibility. They said that the pooch has been trained and, similarly, humans too need guidance from the very beginning.